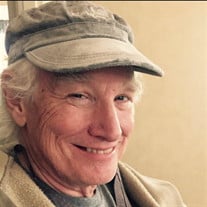 Albert Thomas Nelson, 72, of Bloomington, IN passed away on Tuesday, June 29, 2021, at his home with his family by his side. He was born on April 28, 1949, in Princeton, KY, the son of Ralph Albert and Helen Ernestine (Burns) Nelson. He was raised in Mayfield, KY and attended Mayfield HS. He then enlisted in the US Navy and was stationed at the Bethesda Naval Medical Center as a Hospital Corpsman during the Vietnam War. Al married Penny Jacobs on April 17, 1971, in Silver Springs, MD and they were blessed to celebrate their 50th anniversary this year. Al worked for the Veterans Administration as a supervisor in Material Management at the VA Hospital in Louisville, KY retiring in 2002. His bronze sculpture, “Enduring Light of Freedom”, adorns the front entrance of the hospital along with “She Served, Too” located at a dedicated park on the grounds. “Hearts in Harmony” at the YMCA and “Let’s Play Ball” at the Louisville Slugger Museum are among many of his works. As a Stone Carver and Sculptor, Al had a love of the fine arts and along with his wife founded Nelstone, LLC in 2003, working with schools and organizations to educate children and adults on the art of stone carving. Al was a member of the Speed Memorial Church (Speed, IN) and St Leonard Catholic Church (Louisville, KY). He and his wife worked with the KY Museum of Art & Craft and Arts in Healing at the KY Center for the Arts. He was a musician and wrote over one hundred songs recording his own vinyl albums in 2020. His passions were history and his family. He will be greatly missed by all who loved and knew him. Albert is survived by his wife, Penny J. Nelson; two sons, Peter A. (Samantha) Nelson and Lucas B. (Sarah Marvell) Nelson; two grandchildren, Albert B. Nelson and Mabel M. Nelson, all of Bloomington, IN; two sisters, Pat Nelson and Ann (Howel) Carr; one brother, Ernie Nelson, all of Mayfield, KY; sisters-in-law and brothers-in-law, Candy J. (Gary) Glenn; Earl (Jackie) Jacobs, all of NY, and a whole host of nieces, nephews, family and friends who will cherish his memory forever. He was preceded in death by his parents, Ralph and Ernestine Nelson; two sisters, Mary Ruth (Donald) Elder and Martha Nelson (Tucker) Thomas; two brothers, Jim Nelson and Bill Nelson; sister-in-law, Teddy Jacobs. A memorial service will be held at 2:00pm Tuesday, July 6, 2021, at Speed Memorial Church, 328 US Hwy 31, Sellersburg, IN. (mask will be required). Rev. Dr. Mike Donahue officiating. A bereavement dinner will follow. Cremation Rites have been accorded. Memorial contributions may be made to Hand In Hand Ministries, 518 N. 26th St., Louisville, KY 40212. Allen Funeral Home and Crematory (Sanders, IN) have been entrusted with arrangements. Online condolences, photos and memories may be shared with family and friends at www.allencares.com

Albert Thomas Nelson, 72, of Bloomington, IN passed away on Tuesday, June 29, 2021, at his home with his family by his side. He was born on April 28, 1949, in Princeton, KY, the son of Ralph Albert and Helen Ernestine (Burns) Nelson. He was... View Obituary & Service Information

The family of Albert Thomas Nelson created this Life Tributes page to make it easy to share your memories.

Albert Thomas Nelson, 72, of Bloomington, IN passed away on Tuesday,...

Send flowers to the Nelson family.