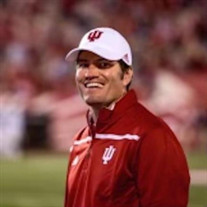 Dr. Andy S. Hipskind, M.D. age 48, a life long resident of Bloomington, passed away Saturday afternoon, September 18, 2021 at his home surrounded by his family. He was born on September 25, 1972 to Nicholas and Sandra Hipskind.  Andy graduated from Bloomington High School North is 1991 as a three sport athlete in football, basketball and track.  He went on to receive both his undergraduate and Doctorate of Medicine degrees from Indiana University in 1995 and 1999 respectively. As an undergraduate he was an honored member of the Phi Gamma Delta fraternity being awarded the Wilkinson Award in which is presented to Phi Gamma Delta's most outstanding senior in the country. He was also 4 year letter winner in track and field, and a member of the Phi Beta Kappa, the nations oldest academic honor society. Andy began his career with Indiana University Athletics when he joined the staff in 2003 as the Director of Sports Medicine and the football team’s physician. Since 2014, he served as the Senior Assistant Athletic Director for Sports Medicine and Sports Performance as well as Indiana University Athletics’ first-ever Chief Medical Officer.    He was frequently honored by both the medical and university communities for his excellence. Earlier this fall he became just the 45th recipient of the Indiana University Distinguished Service Medal, which was presented by Indiana University President Pamela Whitten to recognize his nearly two decades of exceptional professional service to the Indiana University Athletics department and the entire Indiana University community.   Andy’s most treasured role was as husband to his wife Angela, and father to their two children Charlize and Drew, who survive. In addition to his parents, Andy is also survived by sisters Heidi Dolson (Scott) Bloomington, Nicole Huff (Joe) Greenwood, in-laws Terry and Susan Mason, Baconton, GA, sister-in-laws Vikie Lajonvarn (Grant) Denver, CO, Robin Keller (Bill) South Bend, brother-in-law Ryan Mason (Jami) Edwardsburg, MI, nephews, Luke, Sam and Zach WIsen, Nick Dolson, Liam, Cole and Bo Huff, Alexander and William Lajonvarn, Mason, Gavin and Travis Hall and nieces Kristen Dolson and Ellie and Scarlett Mason.  Aunts, Barbara Winter and Sara Montgomery and cousins, Amy Winter, Kim Kesler and Barry (Shelly), David and Ann Montgomery.   He was preceded in death by grandparents  Anthony and Ruth Sundy and Howard and June Hipskind and uncle Michael Montgomery. A Mass of Christian Burial will be held Thursday September 23, 2021 at 11:00AM at St. Charles Borromeo Catholic Church 2222 East Third Street. Visitation for Andy will be held Wednesday September 22, 2021 from 4:00PM to 8:00PM at Allen Funeral Home and Crematory 4155 South Old State Road 37. A gathering of family and friends to celebrate Andy’s life will be announced at a later date. In lieu of flowers the family asks you consider a donation to the Dr. Andy S. Hipskind Memorial Fund in care of the Indiana University Credit Union. Online condolences, photos and memories may be shared with family and friends at www.allencares.com

Dr. Andy S. Hipskind, M.D. age 48, a life long resident of Bloomington, passed away Saturday afternoon, September 18, 2021 at his home surrounded by his family. He was born on September 25, 1972 to Nicholas and Sandra Hipskind.  Andy graduated... View Obituary & Service Information

The family of Dr. Andy S. Hipskind created this Life Tributes page to make it easy to share your memories.

Send flowers to the Hipskind family.