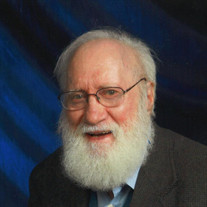 Anthony Shipps passed away peacefully in his sleep on April 9, 2021. He was 94 years old and a long-time resident of Monroe Place in Bloomington. Tony Shipps was born in Tryon, NC in 1926 and was a proud Southerner for the first part of his life. He grew up in a foster home in Fort Valley, GA with the Lester family after his parents divorced. Tony received his education at the Emory Academy and junior college in Oxford, GA before receiving an A.B. from Mercer University. He interrupted his education to serve in the U.S. Navy during World War II. He served as a Pharmacist’s Mate on a destroyer in the Pacific Ocean and was discharged in June of 1946 at the end of hostilities. Returning back to the States, he attended Mercer University for the completion of his undergraduate education. During these years, Tony met his bride and married JoAnn Barnett. She became the cornerstone of his life for over seventy years.   Tony spent one year as Teaching Principal at the Pittsview, AL High School and then moved north to continue his education for his M.A. and Ph.D. in English from Northwestern University. After discovering his dislike for teaching Freshman English during his first collegiate teaching position at Wayne State University in Detroit, he added a second M.A. in Library Science from the University of Michigan, which led to his long career as a Librarian in higher education.   In 1960, Tony commenced his library career at Utah State University as Associate Librarian and then moved to the University of Colorado in Boulder as Head Reference Librarian. In 1967, Tony and Jan moved to Bloomington, IN for his dream job as Librarian for English at University Libraries, Indiana University, where he served until he retired in 1991.   Besides his outstanding academic career, Tony was very active in publications. He enjoyed tracing sources of quotations, especially in English literature of the 17th and 18th centuries. He wrote for British publications the London Times and Notes and Queries for many decades and was active writing for the New York Times for almost half a century. He was the American editor of Bartlett’s Dictionary of Quotations and wrote a standard reference book entitled The Quote Sleuth, published by the University of Illinois Press.   Tony was a long-standing member of the First United Methodist Church in Bloomington, IN. He and Jan were leaders of the Conventicle, a group that discussed the current and historical issues in the life of the church. He was also a Biblical scholar, capable of quoting entire chapters of Scripture by heart.  As anyone who knew Tony was aware, he was convinced that the King James Version of the Bible was the only true Word.   Beloved by his family and generations of friends, Tony’s good cheer and sense of humor will always be remembered. He is survived by his wife Jan, his brother Harrold, his son Stephen, daughter-in-law Teri, grandchildren Lorin Shipps and Lindsay Haake (and her husband Daniel) and four great-grandchildren. Honorary family member Liane Johnson, who served as Tony and Jan’s assistant for many decades survives as well. Services will be private for family and friends. Contributions in Tony’s memory can be made to the Shalom Center and the Monroe County Humane Society. Allen Funeral Home and Crematory 4155 South Old State Road 37 is handling the arrangements and online condolences, photos and memories may be shared with family and friends at www.allencares.com

Anthony Shipps passed away peacefully in his sleep on April 9, 2021. He was 94 years old and a long-time resident of Monroe Place in Bloomington. Tony Shipps was born in Tryon, NC in 1926 and was a proud Southerner for the first part of his... View Obituary & Service Information

The family of Anthony Shipps created this Life Tributes page to make it easy to share your memories.

Anthony Shipps passed away peacefully in his sleep on April 9,...

Send flowers to the Shipps family.