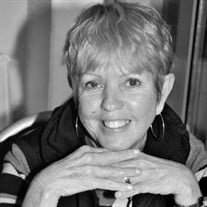 Barbara Ann (Watson) Grissom Hillery passed away Monday, August 2, 2021 following heart surgery. Friends will be surprised to learn her age; she looked decades younger and took great pleasure in being mistaken as a sister to her twin daughters. Barb was born in Galveston, TX, graduated from Southern Methodist University, and resided in Texas until the death of her first husband, Dan B. Grissom. She then joined her daughter in Indiana, where her life’s journey took an unexpected turn. In Barb’s own words, “I met a very nice man from Columbus who I thought would be a great friend. Two years later I married that new best friend!” She and Rex shared a love of travel and explored many countries spread across five continents. Barb was an avid bridge player (described as “ruthless” by one opponent), tennis player and IU basketball fan. She also enjoyed participating in a local book club and Bloomington’s Conversation Club, Newcomers Club and YMCA. Barb’s friends will remember her unfailing positive outlook on life and her ability to learn a stranger’s life story in five minutes (or less). Her grandchildren (who know her as Gigi) will always admire her as their “fashionista” and be in awe of her “superpower” - an uncanny ability to appear when least expected. Neighbors will remember seeing Barb and Rex on their frequent walks and for their habit of greeting children (and their parents) at the school bus with fresh baked cookies after their first and last days of school. Barb also had an amazing gift for finding a parking spot, no matter the time of day or location, and was often spotted tooling around town in her little green VW convertible. Barb’s professional history ranged from teaching kindergarten through 10th grade in Texas as well as serving on her local school board; in Bloomington, she served as executive director of Abilities Unlimited, supervised First Call for Help and facilitated a support group for brain injury survivors and their families. She leaves behind her beloved husband of 26 years, Walter Rex Hillery; adult children Lynda (Jerry) Robison (Columbus, IN), Brenda (Jerry) Stern (Bloomington, IN) and Scott (Jane) Grissom (Jenison, MI); granddaughters Lauren Stern (Bloomington, IN), Robyn Stern (Vashon Island, WA), Samantha Grissom (Philadelphia, PA), Alexandre Grissom (Los Angeles, CA), and Danielle Robison (Columbus, IN); adult stepsons James (Valda) Hillery (Indianapolis, IN) and Andrew (Arine) Hillery (Bloomington, IN); and grandsons Kai and Keean Hillery (Bloomington, IN). A Celebration of Life will be held to honor Barb at a date to be announced. Her family requests that, in lieu of flowers/donations, people extend her legacy by performing random acts of kindness in her honor. Allen Funeral Home and Crematory have been entrusted with arrangements. Online condolences, photos and memories may be shared with family and friends at www.allencares.com

Barbara Ann (Watson) Grissom Hillery passed away Monday, August 2, 2021 following heart surgery. Friends will be surprised to learn her age; she looked decades younger and took great pleasure in being mistaken as a sister to her twin daughters.... View Obituary & Service Information

The family of Barbara Ann (Watson) Grissom Hillery created this Life Tributes page to make it easy to share your memories.

Send flowers to the Hillery family.