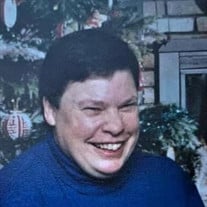 Barbara Catherine Kirsche, 76, of Spencer, passed away on Saturday, November 14, 2020 at Aperion Care in Spencer. She was born on October 14, 1944 in Summit, New Jersey; the daughter of Herman R. and Beatrice O. (Spurrier) Kirsche. Barbara was born with severe intellectual disabilities, however, despite her handicap, and never having a formal education she learned to read and write. Barbara’s accomplishments included having won several medals in Special Olympics Track and Field and participating in Non-Speaking rolls in Summit Playhouse Productions. Following the death of her father in 1975, Barbara and her mother moved to Bloomington, Indiana and she attended Stone Belt. In the fall of 1988, she became the third resident to be accepted into the newly opened Rescare Group Home in Bedford, Indiana. Barbara worked at Stone Belt LARC where she assembled medical drives for COOK, INC and Magic Morning Bakery on Saturday mornings. In the fall of 2014, a fall that resulted in a broken leg necessitated moving her to an assisted living facility. She was very outgoing, no one was a stranger, and she was always happy with a smile for everyone. Barbara is survived by her sister, Margaret Ennis and husband Lee, of Spencer, Indiana; brother, Richard Kirsche and wife, Chris, of Ringoes, New Jersey; newphews, Steve Kirsche, Thomas Kirsche, and Kevin Kirsche; nieces, Pam Wendlandt, and Suzanne Kirsche; and cousins, Lucille Peppers, and Fran Dolan. There will be no services at this time. Allen Funeral Home and Crematory, 4155 S. Old State Road 37, Bloomington, have been entrusted with arrangements. Online condolences, photos, and memories may be shared with family and friends at www.allencares.com

Barbara Catherine Kirsche, 76, of Spencer, passed away on Saturday, November 14, 2020 at Aperion Care in Spencer. She was born on October 14, 1944 in Summit, New Jersey; the daughter of Herman R. and Beatrice O. (Spurrier) Kirsche. Barbara... View Obituary & Service Information

The family of Barbara Catherine Kirsche created this Life Tributes page to make it easy to share your memories.

Barbara Catherine Kirsche, 76, of Spencer, passed away on Saturday,...

Send flowers to the Kirsche family.