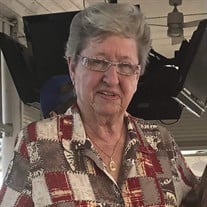 Barbara Ann Mays, 86 formerly of Ft. Myers and Bradenton, Florida passed away on Friday, February 11, 2022, in Ellettsville, Indiana with her family by her side. She was born on August 7, 1935, in Louisville, Kentucky; the daughter of Carl Patterson and Margaret Ella (Hume) Snider. She was a 1954 graduate of Southern High School in Louisville, Kentucky and married her husband, Robert Allen Mays in Louisville on February 14, 1975. She was a delivery driver for NAPA Auto Parts in Louisville for several years before retiring to Ft Myers, Florida in 1997. Barbara had a soft spot for animals, especially her dachshunds. She enjoyed being outdoors and being active. She especially loved playing golf. Barbara, who had never played golf prior to her retirement and before the days of YouTube would spend hours watching golfing VHS tapes, learning to perfect her swing. As a member of the Myerlee Country Club in Fort Myers, Florida Barbara was known to be a great golfer for someone who started the game later in life. Before her retirement, Barbara was known for hosting Saturday night poker for many years as well as an annual summer party with her husband Bobby, where friends and family swam, had good food and made many lasting memories. Barbara is well loved by many and will be missed. Barbara is survived by her children: Linda Spellman of Lanesville, Indiana and Brenda (Jeff) Johnson of Bradenton, Florida; five grandchildren: Brandon (Emily) Smallwood of New Albany, Indiana; Amber (Tommy) Grav of Ellettsville, Indiana; Alexiel Quinn of Seattle, Washington; Devon Smallwood of Tucson, Arizona; and Courtney Spellman of Lanesville, Indiana; three great-grandchildren: Gavin McCord, Rowan and Ragnar Grav and nieces: Judy Harvey and Carla Kaelin and a nephew, Jim Snider, as well as many great nieces and nephews. She was preceded in death by her parents, Carl, and Margaret; first husband, Joseph Johnson and her second husband, Robert “Bobby” Mays; her brother, Carl Hume Snider and her sister Emily Frances (Snider) Rummage. No services are scheduled at this time. Cremation Rights have been accorded. Allen Funeral Home and Crematory have been entrusted with arrangements. Online condolences, photos and memories may be shared with family and friends at www.allencares.com

Barbara Ann Mays, 86 formerly of Ft. Myers and Bradenton, Florida passed away on Friday, February 11, 2022, in Ellettsville, Indiana with her family by her side. She was born on August 7, 1935, in Louisville, Kentucky; the daughter of Carl Patterson... View Obituary & Service Information

The family of Barbara Ann Mays created this Life Tributes page to make it easy to share your memories.

Send flowers to the Mays family.