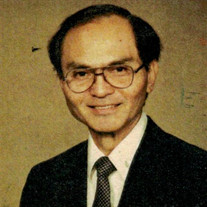 Benito V. Rivera passed away November 2, 2020 at his home, surrounded by his family. In 1936, Benito was born in San Fernando, Pampanga in the Philippines. He was the eighth child of Josefa Vergara, an entrepreneur, and Alfredo H. Rivera, a physician who had earned his medical doctorate at Indiana University in 1921. During the World War II Japanese occupation, Benito’s parents feared that the entire family line could be wiped out in a single attack. They sent five-year-old Benito along with one sister to live with two aunts for a couple years. Once, when he could not sleep and was found crying, his aunt consoled him by telling him to pray to God that he should go to Heaven. He replied, “I don’t want to go to Heaven; I want to go HOME!” Happily, he was reunited with his entire family when the war ended. Benito was the prodigy student of his piano teacher. Although he dreamed of joining a new teacher in Manila, his parents believed he was too young to leave home in the name of Music. Therefore, he pivoted and requested that he join the seminary at Ateno de Davao, a Jesuit college. He would earn a degree in philosophy there, but to his dismay, Benito was permitted only 30 minutes a week to practice his beloved piano, including the minutes it took to commute across campus. In 1964, the seminary sent him to Woodstock College in Maryland to further his study in theology. There, he appealed to the American Jesuits who allowed him to enroll at the nearby Peabody Conservatory in Baltimore. He earned two degrees in piano performance there. He knew music was to be his life’s work. When Benito informed his mother that he was leaving the priesthood, she wept for two days behind locked doors. Soon after, Benito fell in love with a fellow student in a masters piano seminar who would become his wife of 50 years. He earned a Ph.D in musicology at Rutgers University in 1974, and became a United States citizen in 1977. He taught at Bernard Baruch College, the University of Richmond, and North Texas State University. In 1985, Benito joined the faculty at IU’s Jacobs School of Music. His signature seminar: the history of music theory. He was a beloved professor. Upon retirement in 2001, Benito took ice-skating lessons at Frank Southern because he wanted to learn how to fall without breaking a hip. Benito also enjoyed golf, swimming, running, cooking, puzzles and reading. He relentlessly explored and mapped out the distinctive streets of Venice, Italy. In recent years, he rediscovered his love of playing the piano, and applied his usual discipline in honing his technical skills to fully articulate his own interpretation of the score. He is survived by his wife Diane G. Rivera; his sister Teresita Arcilla; his son David B. Rivera (Lily); his daughter Madeline Rivera-Gill (Kevin); his four grandchildren Elijah Gill, Maya Gill, Veronica Rivera and Xavier Rivera; and numerous extended family members, all of whom regarded him as a quiet observer, a self-deprecating humorist, a generous friend, and a loving husband, father, and Lolo. In Lieu of flowers memorial contributions may be made to the RBBCSC Student Assistance Fund, 600 S. Edgewood Dr. Ellettsville, Indiana 47429.

Benito V. Rivera passed away November 2, 2020 at his home, surrounded by his family. In 1936, Benito was born in San Fernando, Pampanga in the Philippines. He was the eighth child of Josefa Vergara, an entrepreneur, and Alfredo H. Rivera, a... View Obituary & Service Information

The family of Benito V. Rivera created this Life Tributes page to make it easy to share your memories.

Send flowers to the Rivera family.