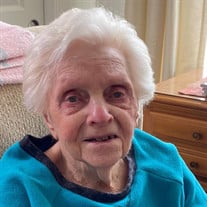 Bessie Naomi (Nilson) Thrasher, 93, of Harrodsburg, passed away on September 27, 2021. She was born on January 24, 1928, to Milt and Pearl (Sipes) Nilson. While a teen, she spent some summers in Bloomington working various jobs while staying with relatives. After graduating from Clearsprings High School in Jackson County, she stayed in Bloomington while working full-time. A favorite memory from her time working in an office at Indiana University was when President Herman B. Wells greeted her and her friend Barbara Chestnut (Weddle) as they were walking across campus while returning from lunch. Bessie is survived by her children: Linda (John) Harper, Jane Canter, Nancy (Bill) Sheehy, Carol (Larry) Tolliver, Susan (Pat) Parker, and Roby (Judy) Thrasher; 10 grandchildren; 9 great-grandchildren; and her beautiful cat Batman. Also surviving are her sister Eva Dale (Nilson) Fleetwood and sisters-in-law Janice Fidler and Vivian Thrasher. In addition to her parents, she was preceded in death by her husband Robert Wyatt Thrasher and a grandchild, Mark Thrasher. The family will have a private service. In addition to being a devoted wife and mother, she was a farmer, a curious reader, and a public servant who served as Clear Creek Township trustee. Bessie is lovingly remembered for her wonderful cooking and ambitious vegetable gardens. Blackberry and raspberry pies and jellies, yeast rolls, broccoli cheese soup, and beef vegetable soup were just a few of her favorites. From her garden, she canned dozens of jars of green beans and tomatoes. And when she finally had a chest freezer, she and the family froze and enjoyed sweet corn all winter long. She will be greatly missed by family and her many friends. Memorial donations may be made to WildCare, Inc., 198 North Hartstrait Road, Bloomington, IN 47404 (http://wildcareinc.org) Allen Funeral Home and Crematory, 4155 S. Old State Road 37, Bloomington have been entrusted with arrangements. Online condolences, phots and memories may be shared with family and friends at www.allencares.com

Bessie Naomi (Nilson) Thrasher, 93, of Harrodsburg, passed away on September 27, 2021. She was born on January 24, 1928, to Milt and Pearl (Sipes) Nilson. While a teen, she spent some summers in Bloomington working various jobs while staying... View Obituary & Service Information

The family of Bessie Naomi Thrasher created this Life Tributes page to make it easy to share your memories.

Send flowers to the Thrasher family.