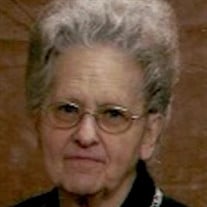 Betty Jean Bradbury, 85, of Bloomington, Indiana went to be with the Lord on Sunday, January 16, 2022 at Hearthstone Health Campus in Bloomington, Indiana. She was born on September 6, 1936 in Indianapolis, Indiana, the daughter of Arthur and Esta Margaretta (Smith) Ferguson. Betty was a 1955 year graduate of Marion High School and attended Marion College for one year in Marion, Indiana. Betty was a secretary at the Marion Chronicle in Marion, Indiana and later was a secretary at the Veterans Home in Marshalltown, Iowa, and then an office administrator at Phi Delta Kappa in Bloomington, Indiana. She enjoyed sewing, making soaps, and spending time with her family. She was very talented and played the marimba and the piano. Until her health no longer permitted it, she enjoyed spending every Saturday at the Bloomington Farmers Market with her daughter and son-in-law selling their honey items. She was a member of Turning Point Apostolic Church in Ellettsville, Indiana. Betty is survived by her children, Timothy (Robin) of Marshalltown, IA; Jeffrey (Jeanne) of Ellettsville, IN; Rebecca (David) Vadas of Bloomington, IN, and David (Juanita) of Kaufman, TX; Seven grandchildren, Misty (Johnny) Perez of Bloomington, IN; Sara Bradbury of Bloomington, IN; Jon (Diona) Bradbury of Bloomington, IN; Nate (Sarah) Bradbury of Monroe, IA; Rachel Ochoa of Tama, IA; Andrew Bradbury of Marshalltown, IA; and Samuel Vadas of Bloomington, IN. Fifteen great grandchildren: Marissa; Alanna; Senora; Austin; Daylen; Brian; Logan; Jackson; Elizabeth; Caleb; Cody; Emma; Selena; Lillian; and Abby. Four great great grandchildren: Lily, Magnolia, Tinsley and Violet; three sisters, Gloria (John) Peters of Gas City, IN, Rose Isaacs of Lavergne, TN, and Dawn Ferguson Webster of Murfreesboro, TN and several cousins and nieces and nephews. She was preceded in death by her parents and two sisters Kathy (Rex) Dobson of Marion, IN and Karen (Herman) Robinson of Murfreesboro, TN. A celebration of life service will be held at 3:00pm Sunday, January 23, 2022 at Turning Point Apostolic Church, 210 W. Vine Street, Ellettsville, Indiana with Pastor Ronald Hawkins officiating. Visitation will be held on Saturday, January 22, 2022 from 5:00pm to 8:00pm at Allen Funeral Home, 4155 S. Old State Rd. 37, Bloomington, Indiana and at 2:00pm to 3:00pm on Sunday, January 23, 2022 at Turning Point Apostolic Church. Burial Service will be held on Monday, January 24 at 12:00pm at Grant Memorial Cemetery, Marion, Indiana. Allen Funeral Home and Crematory have been entrusted with arrangements. Online condolences, photos and memories may be shared with family and friends at www.allencares.com

Betty Jean Bradbury, 85, of Bloomington, Indiana went to be with the Lord on Sunday, January 16, 2022 at Hearthstone Health Campus in Bloomington, Indiana. She was born on September 6, 1936 in Indianapolis, Indiana, the daughter of Arthur and... View Obituary & Service Information

The family of Betty Jean Bradbury created this Life Tributes page to make it easy to share your memories.

Betty Jean Bradbury, 85, of Bloomington, Indiana went to be with...

Send flowers to the Bradbury family.