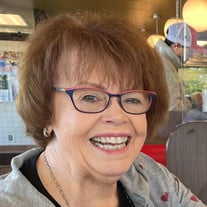 Beverly Diane Ballard, known to her friends as Diane, lived a life of service, laughter, and love. At the age of 17, she married the love of her life, Don Ballard. Shortly after, Diane began working, beginning what would become a career of service and support for hospitals. After many years of working in the administration of Floyd Memorial Hospital, in 1995, she was named Executive Director the hospital’s Foundation. If you had a doctor’s visit or hospital stay in New Albany, Indiana, chances are you benefited from equipment that she made possible. Diane was an outgoing, friendly person…quick witted and swift to laugh… but she did this work quietly, not needing or wanting accolades. She wanted to serve her community. She was also courageous and brave. Friends and family joke that she was a serial ‘retire-er’. She would retire from a job, in a whirlwind of gifts, accolades and respect, only to find herself shortly thereafter moved to jump back into community service. At the age of 68, she stepped into a completely new career as the director of the Monroe County Historical Society. Diane found yet another way to serve and contribute to her community. It was during these years that a love of travel that began with her husband continued to grow. She traveled around the country, visiting art museums and antique bookstores, and experiencing all the beauty and culture she could. And with her daughter Dana, she finally lived her life-long dream of strolling down the Avenue des Champs-Élysées, sipping coffee under the Arc de Triomphe and gazing up at the Eiffel Tower in Paris. While these life experiences and her work were vitally important to her, it was the love in her life that mattered the most. She loved her family and friends, and the greatest love of her life was that of her husband, Don Ballard. The two shared a romance built on love letters, love of family, and Reese’s Cups. Diane, the daughter of James Shelburne and Rosa Beatrice (Hollen) Boes, is survived by her brother and sister, Ron Boes and Linda Hendrich, her two children, Dana Ballard and Doug Ballard, and her daughter-in-law, Janet. Diane and Don found so much joy in their grandchildren: Coleman, Alex, Angel, and Taylor, and their great-grandchildren: Nova, Hazel, Emersyn, and soon-to-arrive, Vincent. Diane’s love for and devotion to her family was vibrant, colorful, and deep. Diane’s final day, before hospitalization, was spent at Brown County State Park, where she and Don had spent countless weekends with their young family. She laughed joyously as stories and memories were shared…..her husband trying to back up the camper into a campsite in the dark, the kids speeding around the park on bicycles, and competing with raccoons for the evenings s’mores. The day was full of hope and joy. Sadly, Diane left us much too soon, but that day, and the memories that we all have of her reflect the amazing amount of love, laughter, and beauty she left in her wake. Diane passed away Saturday, July 31, 2021, at IU Health Bloomington. Services will be held at a later date to honor her life and legacy and more details can be found with Allen Funeral Home and Crematorium in Bloomington, Indiana. Online condolences, photos and memories may be shared with family and friends at www.allencares.com

Beverly Diane Ballard, known to her friends as Diane, lived a life of service, laughter, and love. At the age of 17, she married the love of her life, Don Ballard. Shortly after, Diane began working, beginning what would become a career of... View Obituary & Service Information

The family of Beverly Diane Ballard created this Life Tributes page to make it easy to share your memories.

Beverly Diane Ballard, known to her friends as Diane, lived a...

Send flowers to the Ballard family.