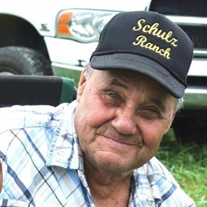 Bill “Pappaw” Schulz, 79, of Little Cincinnati, Indiana, entered eternal rest on Friday, January 1, 2021. He was born on February 12, 1941 to the late Roy and Mabel (Hartman) Schulz. Bill was a retired Local 22 Ironworker and a lifelong horseman. Bill spent his life training and racing horses but his true passion was teaching kids to ride. Bill is survived by his loving wife of 48 years, Betty Jane (Burks) Schulz. She was the love of his life as he was hers.Their love for each other was easily seen and felt by anyone in their presence. Bill was very blessed with a large family. He is survived by his children: son, Billy “Bear” and Jen Schulz; daughter Malisa Schulz James; son, Joe and Teena Schulz; son, Bud Schulz; son, Bill Jr. And Shelli Schulz; daughter, Judy and Terry Jackson; daughter, Jean and John Curatolo; son, Jimmy and Nikki Schulz; and son, Jerry Hodges. He was preceded in death by his daughter, Martie George Ball. Bill was a very proud Pappaw to Jaedyn James, Zea James, Kaitlyn James, Taylor Schulz, Tyson Schulz, Jax Schulz, Natasha and Ben Miller, Nicole Schulz and Kyle Brown, Brayden Schulz, Skylen Schulz, Presten Schulz, Tinslee Schulz, AJ Frye, Madison Schulz, Paige Schulz, Zachary Schulz, Robert Schulz, Tony and Sara Schulz, Crystal and Revas Spencer, Keagan Grace, Brandon Moore, John Michael and Tracey Curatolo, Ashley and Daniel Jones, Nikki Jackson, Ryan Jackson, Amy Dixon, Heather and Allen Croft, and Angela and Timothy Harris. Bill has 28 great-grand babies and one on the way. Bill was a true family man. He loved all his siblings, adored his nieces and nephews, and cherished his horse show family. Bill was incredibly blessed with all his grand babies but he was “Pappaw” to so many. Pappaw could always be found around an arena cheering on all his “grandkids” or in his barn teaching a “grandkid” to ride. Anyone who ever met Bill knew five things about him. He loved his family, he loved coffee, he loved his butterscotch, he loved horses, and he loved to talk. Bill’s love of people was shown everywhere he went. If anyone met him they never forgot him and they came away feeling like old friends. He was always ready and willing to help and wanted nothing more than to see everyone succeed. Considering Pappaw’s favorite place to be was at a horse show, we will be hosting his Celebration of Life on Sunday, February 14, 2021 at 4:00 pm at C Bar C Expo Center in Coverdale, Indiana following a horse show.

The family of Bill "Pappaw" Schulz created this Life Tributes page to make it easy to share your memories.

Send flowers to the Schulz family.