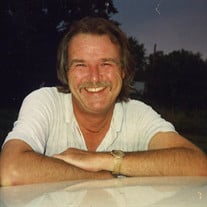 Carey Scott Pittman died peacefully at Bloomington Hospital, January 7th, 2021. Born to William L. and Winifred (Ham) Pittman in Indianapolis, Indiana on April 7th, 1950 they moved shortly after Carey was born to his grandmother’s farm in Hancock County. He played Little League baseball in Wilkerson, Indiana and attended the local elementary school. After several years on the farm his family moved back to Indianapolis where he attended Howe High School for two years before the family moved to Bloomington in 1966. He graduated from Bloomington High School in 1968. Carey was a veteran of the U.S. Army having served with a communications battalion in Germany from 1969 through 1970, achieving the rank of Sergeant before being honorably discharged in 1971. After leaving the service he attended the Columbia Broadcasting School, earning his broadcast license and began a career in broadcasting. He worked for various area radio stations as on air talent, calling play by play for high school sports, as well as reporting from the Indianapolis Motor Speedway in the month of May. Carey was a lifelong follower of Indycar and the Indianapolis 500, and through his broadcasting career became an Indianapolis 500 Oldtimers Club member. He attended his first Indianapolis 500 in 1960 and attended every year except the two years he served in Europe. Carey had also worked part time at Nick’s English Hut and eventually transitioned from radio to work full time at Nick’s where he became a mainstay at the front bar on day shift. He was an avid follower of Indiana University Athletics, especially the basketball and football teams, and, also knowledgeable in current affairs, appeared in numerous newspaper, radio, and tv items as he was always good for a quote on just about any subject. He retired from Nick’s in 2010 and devoted his time to his beloved wife, Leslie Wright Pittman, who preceded Carey in death in 2013. On warm days he could be found at a table out front of Nick’s, holding court on Kirkwood Avenue with his many friends, discussing IU Athletics, the latest racing news, or world events, and he was happiest on home football weekends with the excitement and bustle of the college crowd on Kirkwood. Carey was a good man and good friend. He will be sorely missed by many in the Bloomington community. Allen Funeral Home and Crematory 4155 South Old State Road 37 is handling the arrangements and online condolences, photos, and memories may be shared with family and friends at www.allencares.com

The family of Carey Scott Pittman created this Life Tributes page to make it easy to share your memories.

Send flowers to the Pittman family.