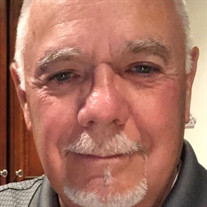 Carl Ray Crichfield, 69, of Bloomington passed away Sunday, December 20, 2020 at the IU Health Bloomington Hospital. He was born on September 9, 1951 in Terre Haute, Indiana the son of Raymond B. and Annetta (Yakel) Crichfield. He was a 1969 graduate of Linton - Stockton High School. Carl worked for United Mine Workers of America for 25 years working in the Chinook Mine before retiring in 2001, he then worked for Crider & Crider for 10 years as a shop supervisor before he fully retired earlier this year. Carl married Andrea Susana Bellitieri on October 5, 2013 in Bloomington, Indiana. He was a member of the Clear Creek Christian Church in Bloomington, Indiana. He enjoyed Hunting, building old cars and IU Sports especially Basketball and Football and he loved baseball his favorite team was the Cubs, He loved was his family and would do anything for them. He will be greatly missed by all who loved and knew him. Carl is survived by his wife, Andrea Crichfield of Bloomington; his son, Brian (Sandy) Crichfield of Pikeville, TN; five grandchildren, Kayla (Wilson) Swafford; Shelby (Wil) Decker; Cody (Jordan) Crichfield; Cassy (Bradley) Wallace and Annalee Crichfield; three great grandchildren, Rylan Swafford; Adley and Brynlee Decker; his sisters, Sally Leclercq; Carolyn Sue Corey; Rhonda Accardo; Regina Young and Vicky Robison; his brother, Scott Alumbaugh; and his step mother, Joann Crichfield of Terre Haute; and several nieces and nephews . He was preceded in death by his parents, and his son Brent Crichfield; his brother Larry Crichfield and his nephew Alex Young. . Visitation will be held on Wednesday, December 23, 2020 from 5:00pm to 8:00pm at the Allen Funeral Home 4155 S. Old St Rd 37 Bloomington, A private funeral service will be held for the family. Burial will be held at Clear Creek Cemetery. Memorial contributions may be made In Carl’s memory to the American Cancer Society. Allen Funeral Home and Crematory have been entrusted with arrangements. Online condolences, photos and memories may be shared with family and friends at www.allencares.com

Carl Ray Crichfield, 69, of Bloomington passed away Sunday, December 20, 2020 at the IU Health Bloomington Hospital. He was born on September 9, 1951 in Terre Haute, Indiana the son of Raymond B. and Annetta (Yakel) Crichfield. He was a 1969... View Obituary & Service Information

The family of Carl Ray Crichfield created this Life Tributes page to make it easy to share your memories.

Send flowers to the Crichfield family.