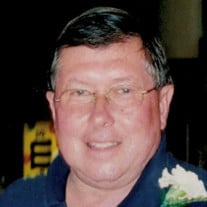 Carl “Eddie” Shaw, 78 of Franklin formerly of Bloomington passed away Friday, November 27, 2020 at the Indiana Masonic Home in Franklin, Indiana. He was born on April 30, 1942 in Bloomington, Indiana the son of Carl Henderson and Ellen Dora (Erwin) Shaw. He was a 1960 graduate of Bloomington High School. Eddie married Melinda (Mindy Poynter) Shaw on March 20, 1999 in Franklin, Indiana they were married for 21 years. He worked in quality control for RCA in Bloomington for 32 years until the plant relocated, he then worked for Indiana University for a short time before going to work for MCCSC in the custodial department until he retired and moved to Franklin where he then worked for Clark Pleasant School Corporation before he fully retired. He was a member of the Hopewell Presbyterian Church in Franklin and the Monroe Masonic Lodge # 22 in Bloomington, Indiana. He enjoyed fishing, gardening, his cats Tommy and Spots, IU Sports and he worked as an usher for the IU games for over 40 years. He loved his grandchildren and would do anything for them. He will be greatly missed by all who loved and knew him. Eddie is survived by his wife, Melinda “Mindy” Shaw of Franklin; his daughter, Amy (Chad) Pickens of Bloomington; his step children, Katrina Browning of Franklin; Matthew Andreas of Franklin; Jessica Andreas of Franklin; seven grandchildren, Abigail “Abby” Pickens; Jenna Browning and Daisy Browning; Haley Andreas; Khyree Barella, Trey Murillo and Christopher Bolds; his sister, Fran (Paul) Jackson of Missouri; two nieces, Lisa Bauman and Annette Knopf; and several great nieces and nephew; his cousin, Gene (Paulette) Shaw; and extended family. He was preceded in death by his parents, and his son Anthony “Tony” Shaw. Visitation will be held on Friday, December 4, 2020 from 10:00am to 12:30pm at Allen Funeral Home 4155 S. Old St Rd 37 Bloomington, IN. A private funeral service will be held for the family. Burial will be held at Valhalla Memory Gardens. There will be a Celebration of Life at Hopewell Church Franklin, IN to be held at a later date. Allen Funeral Home and Crematory have been entrusted with arrangements. Online condolences, photos and memories may be shared with family and friends at www.allencares.com

Carl &#8220;Eddie&#8221; Shaw, 78 of Franklin formerly of Bloomington passed away Friday, November 27, 2020 at the Indiana Masonic Home in Franklin, Indiana. He was born on April 30, 1942 in Bloomington, Indiana the son of Carl Henderson and... View Obituary & Service Information

The family of Carl "Eddie" Shaw created this Life Tributes page to make it easy to share your memories.

Send flowers to the Shaw family.