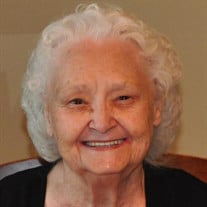 Caroline Marie Elliott, 89, of Bloomington, passed away on Thursday, January 21, 2021 at St. Vincent’s Hospital in Indianapolis. She was born on March 27, 1931 in Bloomington; the daughter of John and Opal (Purtlebaugh) Fulford. Caroline worked for RCA before becoming a devoted mother and homemaker. Caroline was a member of Pentecostal Faith Assembly. Caroline, along with her husband, Bob, organized food and toy drives for 20 years in Owen County and volunteered with the Salvation Army. Caroline began as a nursing assistant in her 60’s, to continue helping others, something she was very proud to have accomplished. Caroline is survived by her children, Terry Mullis, Cheryl Welch (Michael), Tim Mullis (Susan), Vernon Mullis (Kathy), Diana Fisher (David), and Mark Mullis; 26 grandchildren; along with many great-grandchildren and great-great-grandchildren. Caroline is also survived by her sister, Barbara Coonce and Virginia Fowler. She was preceded in death by her husbands, Robert “Bob” Mullis and Fred Elliott; children, Justin Mullis and Robert “Buck” Mullis; infant children, Michael and Teresa, and her parents. A funeral service will be held at 10:00 a.m. on Monday, January 25, 2021 at Pentecostal Faith Assembly. Burial will follow at Duncan Cemetery in Nashville. Visitation will be held from 1:00 p.m. until 5:00 p.m. on Sunday, January 24, 2021 at Allen Funeral Home and Crematory, 4155 S. Old State Road 37, Bloomington. Online condolences, photos, and memories may be shared with family and friends at www.allencares.com

Caroline Marie Elliott, 89, of Bloomington, passed away on Thursday, January 21, 2021 at St. Vincent&#8217;s Hospital in Indianapolis. She was born on March 27, 1931 in Bloomington; the daughter of John and Opal (Purtlebaugh) Fulford. Caroline... View Obituary & Service Information

The family of Caroline Marie Elliott created this Life Tributes page to make it easy to share your memories.

Caroline Marie Elliott, 89, of Bloomington, passed away on Thursday,...

Send flowers to the Elliott family.