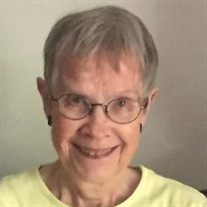 Carolyn Deodene, of Bloomington, Indiana, passed away peacefully at Indiana University Health Hospice House on December 17, 2021. She was 86.      Carolyn was born on June 3, 1935, to Charles and Carolyn Jupenlaz of Elmira, New York. She graduated from the Elmira Free Academy, then attended Stephens College, Elmira College, and Florida State University, where she earned an MLS from the School of Library Science. She worked at the Cincinnati, Ohio, Public Library before marriage, and, after raising her children, returned to work for 24 years at the Newark, New Jersey, Public Library before retiring in 2006.      Carolyn, or "Kay" to her many friends, met her future husband, Frank Deodene, while both worked as librarians  in Cincinnati. They wedded in 1960, and eventually settled in suburban New Jersey. They were married for over 50 years, until Frank’s passing in 2011. Carolyn was also predeceased by her two older sisters, Margery Yater and Mary Pajic.      Carolyn raised her family in Chatham, New Jersey, and, after her husband’s passing, moved to nearby Morristown. Her final years were spent in Bloomington, Indiana, where she moved to be closer to her son. Carolyn lived at Meadowood retirement community, where she made a new set of close friends. She enjoyed reading, listening to classical music, watching PBS documentaries, and taking nature walks. She was a contributor to the National Society of Arts and Letters and to Indiana University's Jacobs School of Music.      Throughout her life, Carolyn was the caregiver of her extended family, taking time off from work to care for her two sisters, her adult son, and others in their times of need.      Carolyn is survived by her daughter Mary Unger, son-in-law Matt, and grandson Alex of Lakefield, Ontario; her son Charles of Bloomington, Indiana; and her brother-in-law Predrag Pajic of Arlington, Virginia.      A memorial will be scheduled at a later date.      Allen Funeral Home and Crematory 4155 South Old State Road 37 have been entrusted with arrangements and online condolences, photos and memories may be shared with family and friends at www.allencares.com

Carolyn Deodene, of Bloomington, Indiana, passed away peacefully at Indiana University Health Hospice House on December 17, 2021. She was 86.&#8232;     Carolyn was born on June 3, 1935, to Charles and Carolyn Jupenlaz of Elmira, New York. She... View Obituary & Service Information

The family of Carolyn Deodene created this Life Tributes page to make it easy to share your memories.

Send flowers to the Deodene family.