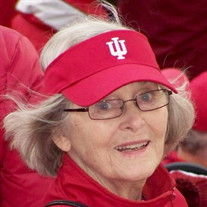 Catherine Elizabeth Lynch was a compassionate, loving wife, mother, grandmother, great-grandmother, sister and friend over the course of her life. Affectionately known as “Cathie,” she left this life while in Hospice care on March 12, 2022 at the age of 92. Ever the kind and sweet optimist, Cathie smiled at both Karen and David the night before she passed away. We are all heartbroken to lose her. Born to Clarence Wedge and Alice Mondale Wedge on March 1, 1930 in Bagley, Minnesota, Cathie was the eldest sister to Mary Alice and Susan. She graduated from Tech High School in St. Cloud, Minnesota, then moved with the family to Bloomington, Indiana in 1948 and attended Indiana University, earning a BS in Education. While at IU in Bloomington, Cathie met Homer “Bud” Lynch and they married in 1952. Daughter Karen was born there a year later. Bud received his Army officer commission through IU in 1953, and thus began life in a military family, moving every few years as assigned. Cathie planned and coordinated each move with great care and precision. Their son David was born after moving to Munich, Germany and daughter Ann (deceased) in Ft. Leonard Wood, Missouri. Always a teacher, she made sure that each military assignment was treated as a learning opportunity. Cathie’s favorite was living in West Berlin, Germany from 1963 to 1966. An exceptional academic who was also fiercely independent, Cathie taught in many schools and libraries in the US and Germany. She found great joy by inspiring in children a love for reading and growth through learning. She earned an MS in Library Science from Indiana University and served as librarian for many years at Rogers and Unionville elementary schools, among others. Following retirement from MCCSC, she and Bud continued their world travels to Norway, Berlin, much of Europe, Alaska, and into Canada, far above the Arctic Circle. Their sense of adventure was grounded by gardening, birdwatching and “walleye hunting” in Canada. True to her professional calling, Cathie was a voracious reader, particularly of mysteries, thrillers and historical novels. She was known to generously share many books from her own extensive personal library with family and friends. Sharing and giving books to her grandchildren and great-grandchildren became a way of life for Cathie in her retirement. Always giving back to the community, Cathie was active in Daughters of the American Revolution, P.E.O., Kappa Kappa Sigma, Delta Zeta sorority, the IU Alumni Association and Varsity Club, Delta Kappa Gamma and First United Methodist Church. Over the years, Cathie knitted hundreds of chemo caps, created many quilts, and even braided wool rugs while she awaited Bud’s return from Vietnam. She loved spending time preparing delicious meals for her family, friends and unannounced guests. Neighbor children especially enjoyed visiting the Lynches for companionship and unconditional kindness. Cathie was preceded in death by her parents, husband Bud, daughter Ann Elizabeth, and sister Mary Alice. She is survived by daughter Karen Lynch (John Steele) of Bloomington; son David Lynch (Catherine) of Evanston, Illinois; grandson Matthieu Lynch (Dr. Mary Lynch), great-grandson Ray, all of Rochester, Minnesota; granddaughter Caroline Lynch (Niren Shrestha) of West Des Moines, Iowa; sister Susan Williams (Jerry) of Anderson; brother-in-law Charles Douglas of New Palestine; and many nieces and nephews. Cathie’s family wishes to thank the many caregivers who showed great kindness and sensitivity toward Cathie during her challenging journey. Her doctor, Wendy Corning, saw her as “One of the shining lights of the world.” A funeral service will be held Allen Funeral Home, 4155 S. Old State Rd. 37, in Bloomington on Friday March 25, 2022. Visitation will begin at 10:00am, followed by a memorial service officiated by Cary Curry at noon, then burial at Rose Hill Cemetery. In lieu of flowers, please consider donating to the Monroe History Center in Bloomington. **The family has requested those in attendance during Cathie's visitation and service, to wear a mask** Allen Funeral Home and Crematory have been entrusted with arrangements. Online condolences, photos and memories may be shared at www.allencares.com

Catherine Elizabeth Lynch was a compassionate, loving wife, mother, grandmother, great-grandmother, sister and friend over the course of her life. Affectionately known as &#8220;Cathie,&#8221; she left this life while in Hospice care on March... View Obituary & Service Information

The family of Catherine Elizabeth Lynch created this Life Tributes page to make it easy to share your memories.

Send flowers to the Lynch family.