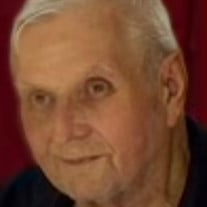 Charles Anderson “Charlie” Chandler, 75, of Bloomington passed away at 1:42pm Friday, June 11, 2021 at the IU Health Bloomington Hospital. He was born on May 22, 1946 in Bloomington, Indiana the son of Lorn K. and Wanda E. (Ridge) Chandler. He was a 1964 graduate of Ellettsville High School in Ellettsville, Indiana. And attended IUPUI in Indianapolis receiving his degree in Electrical Engineering. He was a US Army Veteran serving during the Vietnam War. Charlie was owner of Wildwood Laundry and Dry Cleaning in Nashville for over 15 years, he was an Industrial Electrical Engineer for over 35 years in Indiana. He enjoyed listening to music, camping, fishing, traveling, visiting family and friends, Charlie built four family homes over the years for his family, he loved to provide and help out his family and friends, he will be greatly missed by all who loved and knew him. Charlie was survived by his children, Robert R. (Trina) Chandler of Bloomington; Karen S. (Kevin Mcknight) of Bloomington; Kimberly L. (Todd) Denbraber of Ohio; Terri L (John) Hageland of Carbondale, CO; Nine grandchildren, Cameron (Junia Ray) De Lawter; Carly Denbraber; Caitlyn De Lawter; Courtney Denbraber; Kirsten Chandler; Casey Denbraber; Sierra Hageland; McKenzie Hageland; Teagan Hageland; three great grandchildren, Carter; Jaylen and Cambrie De Lawter; his sister Lorna K (Roy) Briles of Holiday, FL, He was preceded in death by his parents, Lorn and Wanda Chandler. A memorial service will be held at 11:00am Friday June 18, 2021 at the Burgoon Baptist Church. Visitation will be held from 10:00am to service time at the church. Allen Funeral Home and Crematory have been entrusted with arrangements. Online condolences, photos and memories may be shared with family and friends at www.allencares.com

The family of Charles Anderson "Charlie" Chandler created this Life Tributes page to make it easy to share your memories.

Send flowers to the Chandler family.