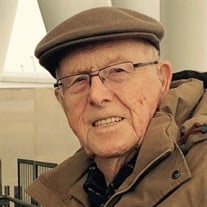 Charles Glenn Parker passed away November 19, 2020 at the age of 95. He was born January 6, 1925 to Carl and Luella (Emrick) Parker in New Berlin, Ohio. He graduated from Shreve High School in Shreve, Ohio in the Class of 1943. He excelled academically and played all years on the baseball and basketball teams. In his senior year, the team won the county basketball tournament. Unfortunately, that year the state tournament was cancelled due to gas rationing. He volunteered for the Army, entering on July 3, 1943. He served in combat with the 80th Division, “The Blue Ridge Boys”, in the Battle of the Bulge in Luxembourg and Germany. He was awarded the Bronze Star and the Purple Heart. In later years, he became active in the 80th Division Association, returning to Europe, attending reunions and researching his and other veterans’ service history. He proudly attended the dedication of a memorial to the liberation of Nocher, Luxembourg at the 70th anniversary of that event as the guest of CEBA Luxembourg. A detailed account of the ceremony is available at www.80thdivision.com/blueridge/15mar.pdf . He worked for 40 years for the East Ohio Gas Company in Canton, Ohio in various capacities, finishing his career as a Commercial Boiler and HVAC Technician. He also served in Union leadership with his job. He married Margaret “Peg” Louise Stewart in May of 1958; she passed away in 2004. They moved from Canton to Bloomington in 1997 to be closer to family. His is survived by his son Douglas and daughter-in law Patricia (Kuzma) Parker, granddaughters Morgan Parker Fraga (Bernard) and Sarah Parker Bauman (Brent), and great-grandchildren Charlotte Parker Bauman, George Carlos Fraga, and Anthony Parker Bauman. His brothers Carl Parker and Harold Parker preceded him in death. He was the best father and grandfather imaginable, and was devoted to his family, church and community. It was a thrill to watch him play with and love his great-grandchildren. Whether you knew him as Glenn, Charlie, Charles, Red, Joe, Dad or Grandpa, you knew he always saw the good in people and enjoyed their company. He was a long-time participant with the YMCA Cardiac Rehab Program. He was a member of First Christian Church in Bloomington and the American Legion. Charlie was an avid golfer and sports fan, particularly enjoying IU Baseball. In retirement, he was a self-taught machinist, crafting miniature engines in his shop. If you wish to memorialize Charlie Parker, please make a gift to the Monroe County YMCA Healthy Hearts & Active Lives (formerly Cardiac Rehab) Financial Assistance program.   There will be a memorial celebration of his life at a later date, and family service at Valhalla Cemetery. Allen Funeral Home and Crematory 4155 South Old State Road 37 is handling the arrangements and online condolences, photos and memories may be shared with family and friends at www.allencares.com

Charles Glenn Parker passed away November 19, 2020 at the age of 95. He was born January 6, 1925 to Carl and Luella (Emrick) Parker in New Berlin, Ohio. He graduated from Shreve High School in Shreve, Ohio in the Class of 1943. He excelled... View Obituary & Service Information

The family of Charles Glenn Parker created this Life Tributes page to make it easy to share your memories.

Send flowers to the Parker family.