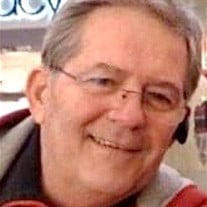 Charles Henry “Charlie” Smith, 79, of Bloomington passed away at 10:12pm Friday, May 28, 2021 at the IU Health Hospice House with his loved ones by his side. He was born on September 26, 1941 in Hartsville, Indiana the son of Vernes and Zora Smith. He was a 1959 graduate of Richmond High School in Richmond, Indiana. Charlie married Karen Gunderman on September 24, 1988 in Bloomington, Indiana they were happily married for 32 years. He worked for Rogers Group in Bloomington and was co-owner of Morning Star Reality in Bloomington and was a member and co-pastor of the Eastern Gate Community Church along with his wife. Charlie was survived by his wife, Karen Smith of Bloomington; his children, Dana (Barry) McCoy of Jacksonville, FL; Tyson (Claire) Smith of Los Angles, CA; Dan (Kara) Gunderman of Gosport, IN; Brian (Valerie) Gunderman of Gosport, IN; several grandchildren; several great grandchildren; his siblings, Ted Smith of Richmond, IN; Eddie (Edie) Smith of Nashville, IN; Cindy (Kelby) Mathis of Columbus, IN; XZYondra (Mike) Hutt of Seymour, IN; and several nieces and nephews. He was preceded in death by his parents, children, Jeff Smith; Randy Smith and Debbie McGuffy; his siblings, Stanley Smith; Juanita Brown; and Kay Jones; one niece and one nephew. Memorial contributions may be made to the IU Health Hospice House or Donor’s Choice in Charlie name. A funeral service will be held at 1:00pm Thursday June 3, 2021 at the Turning Point Apostolic Church at 210 S. Vine St Ellettsville. With Rev. Eli Johnson officiating. Burial will follow at Chambersville Cemetery. Visitation will be held from 4:00pm to 8:00pm Wednesday June 2, 2021 at the Allen Funeral Home 4155 S. Old St Rd 37 Bloomington, and from 11:00am to service time Thursday June 3, 2021 at the church. Allen Funeral Home and Crematory have been entrusted with arrangements. Online condolences, photos and memories may be shared with family and friends at www.allencares.com

The family of Charles Henry "Charlie" Smith created this Life Tributes page to make it easy to share your memories.