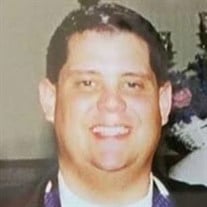 Clint L. Robertson, 47, of Bloomington passed away on Saturday, October 16, 2021 at the IU Health University Hospital in Indianapolis, Indiana. He was born on June 12, 1974 in Bloomington, Indiana the son of Richard Eugene and Linda Carol (Sater) Robertson. Clint was a 1993 graduate of Bloomington High School South. He married Michelle Hamlin on June 5, 1999 in Bloomington, Indiana they were happily married twenty-two years. Clint worked for RCA in Bloomington until they closed, then he went to Rogers Building Supply for seven years, started his own business Design Pro Paint in Bloomington, and then went to work for Cook Medical for the last thirteen years. Clint was a member of Bloomington Free Methodist Church, he was also a lifetime member of the Amateur Trap Shooting Association, he enjoyed trap shooting, bowling and bowling tournaments, Clint was a devoted husband and father. He was especially proud of his two sons and dedicated his time supporting them in everything that they did. He had a network of close family and friends who he loved, and they held a special place in his heart. He was loved by many and will be greatly missed. Clint is survived by his wife, Michelle Robertson of Bloomington; sons, Jordan Tyler (Jordan Bowman) Robertson and Logan Cole Robertson both of Bloomington; his uncle and aunts, Gary & Terry Robertson of Bloomington; Darla Johnson of Bloomington; his adopted sisters, Kelly and Stacy. He was preceded in death by her parents, Richard and Linda; grandparents, Wayne & Mildred (Funkhouser) Johnson and Leon Robertson. A funeral service will be held at 12:00pm Friday, October 22, 2021 at the Allen Funeral Home 4155 S. Old St Rd 37 Bloomington. With Rev Les Rovenstine officiating. Burial will be at Valhalla Memory Gardens. Visitation will be held from 4:00pm to 8:00pm Thursday, October 21, 2021 and on Friday from 11:00am to service time at the funeral home. Allen Funeral Home and Crematory have been entrusted with arrangements. Online condolences, photos and memories may be shared with family and friends at www.allencares.com

Clint L. Robertson, 47, of Bloomington passed away on Saturday, October 16, 2021 at the IU Health University Hospital in Indianapolis, Indiana. He was born on June 12, 1974 in Bloomington, Indiana the son of Richard Eugene and Linda Carol (Sater)... View Obituary & Service Information

The family of Clint L. Robertson created this Life Tributes page to make it easy to share your memories.

Clint L. Robertson, 47, of Bloomington passed away on Saturday,...

Send flowers to the Robertson family.