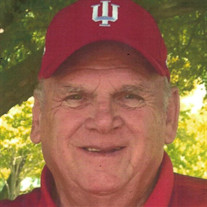 David L. Pratt, 80, of Bloomington, passed away on Tuesday, February 2, 2021 at IU Health Bloomington Hospital. He was born on November 28, 1940 in Ft. Wayne, Indiana; the son of Alvin and Geraldine (Follis) Pratt. Dave worked with United Paperworker’s Union for 28 years before his retirement. He also managed the Hot Dog Stand at Eagle Pointe Golf Course for 19 years. Dave was a member of Sherwood Oaks Christian Church, the 500 Old Timers Club, a former member of Monroe County Alumni Club. He volunteered as a greeter at Cook Hall and Assembly Hall. He attended 49 consecutive races at Indianapolis Motor Speedway, where he videoed for Dick Wallen Productions. Dave was a man of faith, who loved and hugged everyone he met, and was an avid IU Hoosier and Philadelphia Phillies fan. He is survived by his wife of nearly 60 years, Jeannie Pratt; children, A.J. (Donna) Pratt of Ft. Wayne, Troy (Michelle) Pratt of Maineville, Ohio, and Aimee (Michael) Harrahill of Cincinnati, Ohio; grandchildren, Nikkole, Rachel (Eric), Lindsay, Emma, Killian, and Preston; great-grandchildren, Londynn and Carter; sister, Susan (David) Snell; sister-in-law, Joann Donaldson and his best buddy, Rocky the Cat. Dave is also survived by his honorary family, Clint Wallman and Tammy Anderson and their extended families, along with honorary granddaughter, Brittany Slaven. He was preceded in death by his parents, and sister, Joan (Don) Kline. Visitation will be held from 12:30 p.m. to 3:30 p.m. on Saturday, February 6, 2021 at Allen Funeral Home and Crematory, 4155 S. Old State Road 37, Bloomington. A Celebration of Life Service will be held at a later date. In lieu of flowers, memorial contributions may be made to 500 Old Timers Club in Indianapolis. Online condolences, photos, and memories may be shared with family and friends at www.allencares.com

David L. Pratt, 80, of Bloomington, passed away on Tuesday, February 2, 2021 at IU Health Bloomington Hospital. He was born on November 28, 1940 in Ft. Wayne, Indiana; the son of Alvin and Geraldine (Follis) Pratt. Dave worked with United... View Obituary & Service Information

The family of David L. Pratt created this Life Tributes page to make it easy to share your memories.

David L. Pratt, 80, of Bloomington, passed away on Tuesday, February...

Send flowers to the Pratt family.