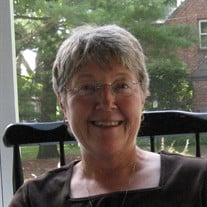 Diane Lynn Purnell passed away in Indianapolis, Indiana on May 25, 2017 at the Simon Cancer Center of Acute Myeloid Leukemia. Diane was born January 16, 1950 in Tecumseh, Michigan, the daughter of Nello and Jennie Stevens. She grew up in Deerfield, Michigan, where she graduated from Deerfield High School in 1968. She went on to graduate from Eastern Michigan University in 1972. Diane was a member of Sigma Kappa Sorority at Eastern Michigan. Diane was preceded in death by her parents and by her brother, James N. Stevens. Diane and George Purnell were married on January 23, 1980 at St. Luke’s United Methodist Church in Indianapolis. They lived in Indianapolis until 1987, when George was ordained as a United Methodist clergyman. During their career in ministry, George and Diane served 3 United Methodist congregations in Indiana: Pittsboro, from 1987-1995; Evansville Aldersgate from 1995-2003; and Bloomington First from 2003-2011. The couple returned to Evansville to reside, and to serve in their last appointment as District Superintendent of the Southwest District of the United Methodist Church from 2011-2016. In 2016 the Purnell’s retired and continued to live in Evansville. Diane was active in many organizations. She was a long time member and immediate past president of the Evansville BB Chapter of P.E.O. While living in Bloomington, Diane was a founding member of and past president of the Bloomington EV Chapter of P.E.O. She was a member of book clubs, bridge clubs, and of a Tuesday morning Bible study group at Aldersgate UMC, her home church. Diane was devoted to the mission of Ivy Tech Community College. She worked for Ivy Tech in both Evansville and Bloomington, first as an adjunct instructor and later full time in student services in Bloomington, where her role was director of student retention. She was instrumental in helping students and their families find ways to continue their education at Ivy Tech, and she helped many students plan and navigate their way through the curriculum. Diane is survived by her husband of 37 years, George Purnell. She is also survived by her daughter Sarah Purnell, of Taos, New Mexico, and her stepchildren, Daniel Purnell of Evansville, Dawn Purnell Furlong of Santa Fe, New Mexico, and Dustin Purnell of Evansville. She is also survived by her sisters Nancy McCormick of Findlay, Ohio; Judy Bowman of Largo, FL; and Teresa Gardner of Anchorage, Alaska; and by nieces and nephews, and great nieces and nephews, whom she loved like younger siblings. She loved to make food and play cards, especially euchre, in family gatherings. People who met Diane even once were impacted by her generosity of spirit and her contagious joy. She lived with no pretense. She genuinely cared about people, and her Christian faith was evident in every encounter she had. She accepted and loved people, and her way of being with others brought out the best in them. A memorial service will be held at Aldersgate United Methodist Church, 5130 Lincoln Avenue, Evansville, Indiana at 3 PM on Saturday June 3, 2017. A time of gathering to remember Diane and visit with family and friends will be held prior to the service, from noon to 3 PM, also at the church. In lieu of flowers, memorial gifts may be made to Aldersgate United Methodist Church to be distributed evenly to support the Kenyan Mission of Aldersgate and to P.E.O. International for scholarships for women. Allen Funeral Home and Crematory 4155 South Old State Road 37 is handling the arrangements and online condolences, photos and memories may be shared with family and friends at www.allencares.com.

Diane Lynn Purnell passed away in Indianapolis, Indiana on May 25, 2017 at the Simon Cancer Center of Acute Myeloid Leukemia. Diane was born January 16, 1950 in Tecumseh, Michigan, the daughter of Nello and Jennie Stevens. She grew up in Deerfield,... View Obituary & Service Information

The family of Diane Lynn Purnell created this Life Tributes page to make it easy to share your memories.

Diane Lynn Purnell passed away in Indianapolis, Indiana on May...

Send flowers to the Purnell family.