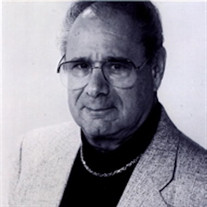 Dominic G. Spera, 89, of Fort Wayne passed away Saturday, October 23, 2021 at the Five Star Nursing Home in Fort Wayne, Indiana. He was born April 19, 1932 in Kenosha, Wisconsin, the son of Gustonzo and Anita (Nicolazo) Spera who preceded him in death. He was a U.S. Army Veteran serving during the Korean War. Dominic Spera’s professional background includes prolific work as a composer-arranger and performances as a jazz artist. For 10 years, Mr. Spera performed professionally in New York City, playing Birdland to Carnegie Hall. He worked in TV and recording studios, which included the Firestone T.V. show, Fred Waring T.V. show, City Center Ballet Orchestra, Radio City Symphony and the Roxy Theater orchestra. He also played lead trumpet in several Broadway Shows including "How To Succeed In Business”, "Stop The World I Want To Get Off”, "The Roar Of The Grease Paint The Smell Of The Crowd”, and "On A Clear Day You Can See Forever”. He played in the bands of Lional Hampton, Andy Kirk, Charlie Barnet, Billy Butterfield, Tito Puente, Benny Goodman, Tommy Dorsey, and Les and Larry Elgart. From 1966 to 1974, Mr. Spera played first trumpet for Burt Bacharach, Johnny Mathis, Andy Williams, Henry Mancini, and a host of other entertainment luminaries. He also performed with Frank Sinatra in Las Vegas and Natalie Cole on her national tour. He performed with the Boston, Cleveland, Indianapolis, Pittsburgh, St. Louis Symphonies and toured in virtually every state in the U.S.A plus Australia, Canada, China, Italy and Japan. From 1968 to 1976, Mr. Spera was associated with the University of Wisconsin-Eau Claire, teaching Jazz and Trumpet, and his Jazz program was cited by Down Beat Magazine as "a national success story” and he was also awarded ‘Jazz Educator of the Year’. He was extremely active as a clinician/director for summer jazz camps and university seminars which included the very successful University of Wisconsin Shell Lake Jazz Camp and the University of Alberta. In 1976 he received a grant from the National Endowment for the Arts for six compositions for Jazz Band. In June 1992, Mr. Spera served as soloist, clinician, and conductor at the Monaco Jazz Masters Jazz Festival in Monte Carlo. Dominic Spera’s contributions to music have gained him international recognition in the jazz curriculum area as well as in the performing arts and a place in Who’s Who in America. He taught privately and in school systems for over forty years and is an honor graduate with a BME. BM and MME from Indiana University. Mr. Spera was very active as an international soloist, clinician, composer and author for the YAMAHA Corp., Barnhouse Publishing Corp., Hal Leonard Publishing Corp., Studio P/R, Columbia Pictures Corp., Houston Publishing Co. and Really Good Music, LLC. The composer of over 100 jazz ensemble compositions and two Disney overtures, Mr. Spera was Professor Emeritus of the Indiana University Jacobs School of Music where he taught jazz arranging and composition, jazz pedagogy, jazz ensemble and jazz history for 20 years from 1977 to 1997. In 2016 he was inducted into the Jacobs School of Music Jazz Hall of Fame. He is survived by his wife of 65 years, Patty Spera as well as his two sons Greg and Mark, their wives Jennifer and Maryann, and three grandchildren, Kristyn, Kandice, James, and one great grandchild Lincoln. There will be a private ceremony for the family Sunday October 31, 2021 at 5:00p at the Midwest Funeral Home located at 1415 W. Coliseum Blvd., Fort Wayne, IN 46808. Mr. Spera will be buried at Valhalla Memory Gardens in Bloomington. Cards of condolence can be sent to 2601 Covington Commons Dr., Apt 63, Fort Wayne, IN 46804. In lieu of flowers, greatly appreciated would be donations to the Dominic Spera Scholarship Fund at Shell Lake Arts Center. Checks can be sent to: The Dominic Spera Scholarship Fund Shell Lake Arts Center 802 First Street PO Box 315 Shell Lake, WI 54871 Donations can also be sent electronically through: https://www.shelllakeartscenter.org (Click the donate/payment tab at the top of the home page). A Celebration of Life memorial service will be held in early 2022 in Bloomington, IN. Allen Funeral Home and Crematory have been entrusted with arrangements. Online condolences, photos and memories may be shared with family and friends at www.allencares.com or on Facebook on the ‘Remembering Dominic Spera’ page.

Dominic G. Spera, 89, of Fort Wayne passed away Saturday, October 23, 2021 at the Five Star Nursing Home in Fort Wayne, Indiana. He was born April 19, 1932 in Kenosha, Wisconsin, the son of Gustonzo and Anita (Nicolazo) Spera who preceded him... View Obituary & Service Information

The family of Dominic G. Spera created this Life Tributes page to make it easy to share your memories.

Send flowers to the Spera family.