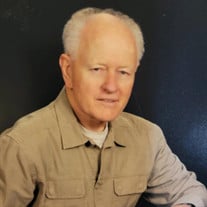 Donald Dee Chasteen of Smithville passed away on Tuesday, June 1st, surrounded by his family. He and his twin brother, Ronald Lee, were born on June 5, 1943 in Bloomington to John Chasteen, Jr and Leona (Mathis) Chasteen, who were life-long residents of Monroe County, Indiana. Donald grew up in Smithville. As young boys, he and his beloved twin brother enjoyed many adventures together such as riding their Cushman motor scooter, sometimes repairing it more than they rode. In the early days, he and his brother, Ronald, collectively saved their lunch money and would hitchhike from Bloomington to Stout Army Air Field in Indianapolis to enjoy the drag races. While babysitting their little brother, Jerry, Donald and Ronald would occasionally hot-wire the family car taking the three of them for joy rides. Donald fondly remembered their mother baking each of them their own chocolate pie. He and his twin brother were like one. Donald and Ronald were one of four sets of twins in the fourth grade at Smithville School. They attended Smithville High School together until Ronald passed away due to an illness in 1959. After losing his twin brother, Donald went on to meet his wife, Garland June (Scott). They were married on January 28, 1960 in Ellettsville, IN. Together they had three children: Angie, Donnie, and Lizzy. Donald was a structural iron worker for 20 years, often-times traveling around the country working at different locations on major building projects, including the construction of Three Mile Island, a nuclear power plant in Middletown, PA. After being diagnosed with cardiomyopathy, and with the help of his wife, June, he changed career paths and became a pawnbroker, opening Gold N Pawn in Bloomington. Donald retired from the pawn business in 2003. Don’s passion of collecting and restoring vintage motorcycles, automobiles, clocks, and antique furniture consumed his entire adult life. He was world-renowned for his expertise in restoration of vintage motorcycles. His 1958 Sportster XLCH, which he meticulously restored, was purchased by the Harley-Davidson company and currently sits in the Harley-Davidson Museum in Milwaukee, Wisconsin. Don’s bikes have appeared in several books and calendars, including the Harley-Davidson Calendar. The internationally renowned art museum in New York, The Guggenheim, invited Don to display his flawless 1957 Sportster to be one of the 114 motorcycles included in the 1998 “The Art of The Motorcycle” exhibition. Don had been approached by celebrities to restore their motorcycles. He often-times communicated with people from across the globe giving much sought after advice, as his reputation has been far-reaching. Donald will be remembered by all who knew him as someone who loved a challenging project and bringing old things back to their original glory, driving around the country to attend antique motorcycle swap meets or searching for another motorcycle or car, having a good meal with family and friends, making mashed potatoes on Friday nights as “Tater Man”, always willing to save and befriend a stray cat, and tinkering away in his garage until the wee hours of the night. Donald was preceded in death by his twin brother Ronald Chasteen, parents John and Leona Chasteen, daughter Elizabeth Cunningham, and grandson Ashley Turner. He is survived by his wife of 61 years, June; his children Angela (Sam) Kelley and Donnie (Kimberly) Chasteen, Bridget (Carl) Sneed; his grandchildren Dane (Haley) Fox, Arianne Kelley, Coleman Chasteen, Garland Kelley, and Winston Chasteen; great grandson Liam Fox; his siblings Jerry (Mary) Chasteen and James Chasteen along with several nieces and nephews. Visitation will be Sunday, June 6, 2021 from 6pm until 8pm and on Monday, June 7th from 12pm until 2pm followed by the service at Allen Funeral Home, 4155 South Old State Road 37, Bloomington. Donald will be laid to rest in the Smithville Cemetery. A celebration of his life will follow the graveside service in Red Men Hall in Smithville. Online condolences photos and memories may be shared with family and friends at www.allencares.com

Donald Dee Chasteen of Smithville passed away on Tuesday, June 1st, surrounded by his family. He and his twin brother, Ronald Lee, were born on June 5, 1943 in Bloomington to John Chasteen, Jr and Leona (Mathis) Chasteen, who were life-long... View Obituary & Service Information

The family of Donald Dee Chasteen created this Life Tributes page to make it easy to share your memories.

Donald Dee Chasteen of Smithville passed away on Tuesday, June...

Send flowers to the Chasteen family.