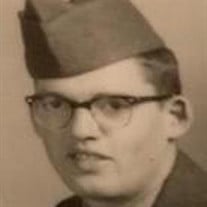 Donald Lester Hill, 87 of Bloomington passed away Wednesday, November 18, 2020 at the IU Health Methodist Hospital in Indianapolis, Indiana. He was born on August 18, 1933 in Bloomington, Indiana to Stanley Francis and Lois Blanche (Porter) Hill. He was a 1951 graduate of Bloomington High School. Donald married the love of his life, Carolyn Sue Hall on June 21, 1953 in Bloomington, Indiana. They were married for 67 years. He served in the US Army and was stationed overseas in France from October 21, 1953 to October 6, 1955. He was also a member of the American Legion Post 18 in Bloomington. Donald retired from the United States Postal Service after working 30 years as a letter carrier. He loved working on cars, small engines, and lawn mowers. He enjoyed traveling out west in his truck and camper with his family, visiting numerous historical sites, and vegetable gardening. He loved growing tomatoes and would till and plant your garden for you. He was very active with Citizens Band Radio (CB) and his handle nickname was Sleeper. He participated in the CB Club called Helping Hands and was in charge of numerous fundraisers to benefit Clothe a Child in Monroe County. One of his biggest loves was his grandchildren and he would do anything for them. He would grin when looking at photos of his two young great grandchildren who are 2 1/2 years and 4 months old. Everybody would say he would give the shirt off his back and ask for nothing in return. Donald is survived by his wife, Carolyn Sue Hill of Bloomington; Children, Donald C (Karon) Hill of Bloomington; Daniel A (Cheryl) Hill of Ellettsville; Janet S (Manny) Mertens of Mooresville; LeAnn E Hill of Ellettsville; his grandchildren, Todd A Hill; Amber R Mertens; Kristin L (Jack) Foth; Megan R Saylor; Jacob A Hill; and his great grandchildren, Jackson R Foth and Abigail L Foth. He was preceded in death by his parents, Stanley and Lois Hill; his grandson, Clinton T. Hill; his brother, David Hill; and sister, Norma Ellen Douglas. No services are scheduled at this time. Cremation rites have been accorded. Allen Funeral Home and Crematory has been entrusted with arrangements. Online condolences, photos, and memories may be shared with family and friends at www.allencares.com.

The family of Donald Lester Hill created this Life Tributes page to make it easy to share your memories.

Send flowers to the Hill family.