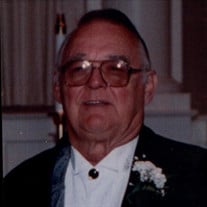 Donald George Spilbeler, age 90 of Bloomington passed away May 5, 2021 at the Indiana University Health Bloomington Hospital. He was born March 22, 1931 in Bloomington, Indiana to George C. and Mary Alice (White) Spilbeler, and lived in Ellettsville, Indiana until 1943. Donald and his family moved to Indianapolis and attended Arsenal Technical High School, where he played football. He graduated in 1949 and enlisted in the U.S. Navy and was honorably discharged in 1950. He married Carol E. Miller January 19, 1951 and had five children: Donna (Robert) Harley of Indianapolis, In., Larry (Pamela) Spilbeler of Plainfield, In., Cindy (Rick) Albertson of St. Louis, Mo., Diane (Roger) West of Lafayette, In., and Michael (Mary Lee) Spilbeler of Indianapolis, In. Donald has nine grandchildren and nine great-grandchildren. He married Margaret Selzer-Young in 1969 in Bloomington, In., and they lived in Louisville, Ky. for 4 years returning to Bloomington in 1974. He is survived by 2 stepchildren: David Young of Sebastian, Fl. and Lynne (Tucker) Madawich of Bloomington, In. and three step-grandchildren in Florida. Don entered the insurance business in 1953 in Indianapolis. He transferred to Lansing, Mi. in 1960 as District Manager. In 1962 he transferred to Hagerstown, Md. as Manager. He returned to Indianapolis in 1966 where he worked for Cannon IV until he retired in 1993. He enjoyed all sports and was an avid fan at his children’s and grandchildren’s sporting events, and participated in the Senior Games in Bloomington for several years winning multiple medals. He was preceded in death by his parents, three sisters (Evelyn Loesch, Barbara McGrevy, Gwendolyn Bailey), and his first wife. Visitation will be held Saturday, May 15, 2021 from 10:00AM to I:00PM at Allen Funeral Home and Crematory 4155 South Old State Road 37, Bloomington, Indiana 47401. A private family graveside service will be held at a later time. In lieu of flowers, donations can be made to the Monroe County Humane Society, PO Box 1334, Bloomington, IN 47402. Website – www.monroehumane.org Online condolences, photos and memories may be shared with family and friends at www.allencares.com

Donald George Spilbeler, age 90 of Bloomington passed away May 5, 2021 at the Indiana University Health Bloomington Hospital. He was born March 22, 1931 in Bloomington, Indiana to George C. and Mary Alice (White) Spilbeler, and lived in Ellettsville,... View Obituary & Service Information

The family of Donald George Spilbeler created this Life Tributes page to make it easy to share your memories.

Donald George Spilbeler, age 90 of Bloomington passed away May...

Send flowers to the Spilbeler family.