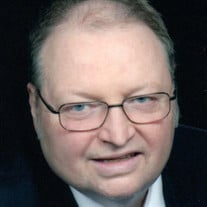 Donald Ray Yoder, 72, of Bloomington, Indiana passed away Saturday, December 26, 2020 at the IU Health Bloomington Hospital. He was born on May 28, 1948 in Elkhart, Indiana the son of Elmer Jacob and Fern Edith (Weaver) Yoder. He was a 1966 graduate of Wakarusa High School in Wakarusa , Indiana. He also was a 1970 graduate of Manchester College with his bachelor’s degree in business. Don married Doris Jean Baker on January 29, 1972 in Arcanum, Ohio. They were happily married for 48 years. Don worked many jobs over the years before finding employment at the deli department for Kroger in Goshen, Indiana. He enjoyed working there for over 20 years before retiring in 2009. Don was a member of Baugo Church of the Brethren in Wakarusa, and then the West Goshen Church of the Brethren, and after moving to Bloomington attended Sherwood Oaks Christian Church. He enjoyed country music, westerns, card games and golf. He loved spending time with his family and friends. He will be dearly missed. Don is survived by his wife, Doris Yoder of Bloomington; his children Denise (Patrick) Tolbert of Cork, Ireland; David Yoder of Bloomington; three grandchildren, Brendan Tolbert, Moya Tolbert, and Corwin Tolbert; his sister, Sally Stutzman of Syracuse; his brother, Terry Yoder Sr. of Lafayette; two brothers-in-law John S. Bowers and Philip Baker; and many nieces, nephews and cousins. He was preceded in death by his parents; sister, Peggy Bowers; brothers-in-law Dennis Baker and Jerry Stutzman. In lieu of flowers memorial contributions may be made to the charity of your choice in Don’s name. There are no services scheduled at this time. Allen Funeral Home and Crematory have been entrusted with arrangements. Online condolences, photos and memories may be shared with family and friends at www.allencares.com

Donald Ray Yoder, 72, of Bloomington, Indiana passed away Saturday, December 26, 2020 at the IU Health Bloomington Hospital. He was born on May 28, 1948 in Elkhart, Indiana the son of Elmer Jacob and Fern Edith (Weaver) Yoder. He was a 1966... View Obituary & Service Information

The family of Donald Ray Yoder created this Life Tributes page to make it easy to share your memories.

Send flowers to the Yoder family.