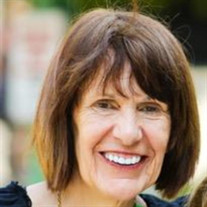 Donna Bodnar’s pursuit of happiness covered a good deal of ground. Hugging grandchildren, walking on Pacific beaches, and sipping wine in Italy—preferably Montepulciano-- were certainly at the top of her list. She did have her standards. Indiana University basketball games could only be watched if she knew they had already won. Pasta was always preferable to most other dishes. The folk music of the sixties evoked deep passions for her, especially the songs of Eric Anderson, Buffy Sainte-Marie, and Ian and Sylvia. Most who knew her then would concede that she was at her best dancing the shing-a-ling, with her creation of lasagna dishes a close second. Fascinated and repulsed by the way he treated women, she consumed any novel she could find on the life of Henry VIII. For a time, she became an avid tennis player and an expert gardener. And her pets were continual sources of pleasure. Sadly, her quest for joy was tempered by declining health in the last few years of her life and ended with her death on March 15, 2022. Born in Carbondale, PA on June 17, 1945, she was the daughter of John and Martha Chellino who sent her to the town’s Catholic schools. In 1967 she earned a bachelor’s degree at Marywood College and accepted a position teaching sixth grade in Manassas, Virginia. Before she moved to her new job, she stopped for an inspired moment of pleasure to buy a yellow Corvette with a removable top. In 1968 she married and continued teaching in schools in Connecticut and Pennsylvania, especially enjoying her years in Hershey where she made frequent visits to Chocolate World. She moved to Bloomington, Indiana in 1981 where she continued raising two children, worked for a time as a bookkeeper and cultivated her basketball loyalties. Donna is survived by her husband of fifty-three years, John Bodnar of Bloomington; her son Eric Bodnar of Bloomington, and her daughter Brenna Snider and son-in-law Kipp Snider of Arlington, VA. Five sisters-in-law, four brothers-in-law, and cousins too numerous to mention also survive her. Her much-adored grandchildren who will miss her terribly are Sophie Snider, Francesca Snider and John Snider. She was predeceased by her parents and a brother, Jack Chellino. We can’t know if she is still singing the folk tunes of her youth. If she is Ian and Sylvia’s “Four Strong Winds,” will be on her lips and she will be lingering on words that she loved: “If the good times are all gone. Then, I’m bound for movin’ on. I’ll look for you if I’m ever back this way.” Those who knew Donna realized that she did not like being the center of attention. In lieu of funeral services, there will be a gathering to celebrate Donna's life this summer, The family requests that memorial contributions be made to the Monroe County Humane Association. Allen Funeral Home and Crematory, 4155 S. Old State Road 37, Bloomington, IN have been entrusted with arrangements. Online condolences, photos, and memories may be shared with family and friends at www.allencares.com

Donna Bodnar&#8217;s pursuit of happiness covered a good deal of ground. Hugging grandchildren, walking on Pacific beaches, and sipping wine in Italy&#8212;preferably Montepulciano-- were certainly at the top of her list. She did have her... View Obituary & Service Information

The family of Donna Bodnar created this Life Tributes page to make it easy to share your memories.

Send flowers to the Bodnar family.