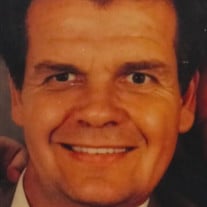 Rev. Dwight L. Hardin, 82, of Bloomington, Indiana went to be with his Lord and Savior on Wednesday, December 29, 2021 at Bell Trace Health and Living, surrounded by his loving family. He was born on July 10, 1939 in Greene County, Indiana, the son of Rev. Clarence and Mamie Marie (Hamlin) Hardin. Dwight was a 1958 graduate of Nashville High School, where he was a star basketball player on the school team. He married the love of his life, Martha Ellen McCammon, on July 10, 1959 in Nashville, Indiana. Dwight always said; "She was my best birthday gift ever!" They were happily married sixty-two years. Dwight was a Minister and Pastor for over fifty years in Nashville, IN; Pierre, SD; Martinsville, IN; Washington, IN; Effingham, IL; Cedar Lake, IN; Wisner, LA; Houston, TX; and Bloomington, Indiana. He was a songwriter, musician, vocalist, recording artist, author, and evangelist for over sixty years. He was an ordained minister of the United Pentecostal Church International (UPCI). Dwight was known for his selfless love for others, he was a true man of God, he enjoyed fishing, and was also a "fisher of men" who lived to win souls to the Lord Jesus (Matthew 4:19). He also enjoyed pickin' & grinnin' on his guitar and mandolin, traveling all over the world, boating, and basketball. He was a great friend to many, and always had a word of encouragement to share with everyone he met. Dwight was a family man who loved his family dearly. His unique sense of humor lives on through many of his children and grandchildren. He will be greatly missed. Dwight is survived by his wife, Martha E. Hardin of Bloomington; his children, Mark (Ronda) Hardin of Xenia, IL; Melissa (Paul) Majdling of Bordeaux, France; Melinda “Mendy” (Damien) Erwin of Bloomington; six grandchildren, Miranda (Kevin) Tipsword; Micah Hardin; Marina (Jay) Soufflet; Melanie Majdling; Jarrod Erwin and Joshua Erwin; Five great grandchildren, Karson; Liam; Joselyn; Lincoln and Leah; his brother, Paul D. (Betty) Hardin of Nashville; two sisters, Trophina Sue Lucas of Nashville; Joanne (Gary) Jackman of Nashville; and several nieces, nephews, and cousins. He was preceded in death by his parents, two brothers: his twin James Franklin Hardin and Merle Ray “Bunny” Hardin; two sisters: Alma Lois Hardin and Wilma Louise Beavers. A funeral/celebration of life service will be held at 7:00pm Thursday, January 6, 2022 at the Allen Funeral Home 4155 S. Old St Rd 37, Bloomington, with Elder Henry Mobley officiating. Visitation will be held from 3:00pm to service time Thursday, January 6, 2022 at the funeral home. Burial will be held at 2:00pm (Indiana time) 1:00pm (Illinois time) on Friday, January 7, 2022 at the Oskaloosa Cemetery in Oskaloosa Township, Illinois. Memorial contributions may be made to the St. Jude Children’s Research Hospital. The Service will be live streamed on youtube at Allen Funeral Home Bloomington, Indiana. Allen Funeral Home and Crematory have been entrusted with arrangements. Online condolences, photos and memories may be shared with family and friends at www.allencares.com

Rev. Dwight L. Hardin, 82, of Bloomington, Indiana went to be with his Lord and Savior on Wednesday, December 29, 2021 at Bell Trace Health and Living, surrounded by his loving family. He was born on July 10, 1939 in Greene County, Indiana,... View Obituary & Service Information

The family of Rev. Dwight L. Hardin created this Life Tributes page to make it easy to share your memories.

Send flowers to the Hardin family.