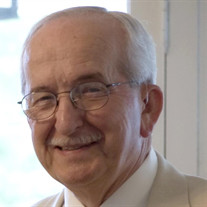 Earl Glenford Moehn, 89, of Mt. Clemens, Michigan passed away peacefully at Hospice House in Bloomington, Indiana on August 9, 2021. Earl was born on January 22, 1932, in Saline, MI to Carl John Moehn and Tema Louise Eisele. His strong work ethic started at a young age. He sold his chicken’s eggs to neighbors and held a paper route at the age of nine. He was mentioned in the Saline newspaper that he delivered papers like a “major.” He attended Saline High School, graduated from University of Michigan in 1954, then joined the United States Air Force. He was in the 438th Air Force Interceptor Squadron, spent four months in Waco, TX at Connally AFB, four months in Valdosta, GA at Moody AFB, then was stationed near Sault Ste. Marie, MI until 1957. After serving in the Air Force, Earl attended Wayne State University School of Medicine in Detroit, MI graduating in 1962. His residency was at Detroit Receiving Hospital; during that time he met Janet McCann. Earl married Janet Raye McCann on August 15, 1969; they lived in Mount Clemens, MI where he practiced medicine for 46 years. He was a general surgeon at St. Joseph’s Hospital until 2007; he wasn’t ready to retire so he continued his passion assisting with orthopedic surgery until 2015, and then became the medical director at a radiation oncology center until his final retirement in 2019. Earl was a member of Rotary and a board member of the Michigan State Medical Society. He loved all sports; he enjoyed playing golf and attending Michigan and IU football games. He loved to travel and play cards; he was an excellent Bridge player (although his wife was a better player!). He was an avid reader especially enjoying history and World War II books. He loved to spend the summers in Bay View, Michigan with good friends and family. Earl was a kind soul; he will be remembered as a dedicated husband and father, who brought humor and joy to his family. In addition to his parents, Earl was preceded in death by his wife, Janet Moehn; his brothers Art (Donna) Moehn, Elton Moehn and his sister Eileen (Harry) Girbach; his nephews Mark Moehn and Scott (Nancy) Moehn. Earl is survived by his three children, Betsy (Chris) Smith of Bloomington, IN, John Moehn of Detroit, MI, and Wendy (Chris) McNamee of Alexandria, VA; four grandchildren, Lucy, Max, Harrison and Quinn; sister-in-law, Jeanne Moehn of Tucson, AZ; nieces, Jacque (John) Kudner of Clarklake, MI, Debi (David) Tuttle of Granger, IN, Carla (Richard) Sally of Saline, MI, Mary (David) Benson of Tucson, AZ. In lieu of flowers, donations can be made to Jill’s House at 751 Tamarack Trail, Bloomington, IN 47408 or IU Health Bloomington Hospice House at 2810 S. Deborah Drive, Bloomington, IN 47403. The family would like to extend their heartfelt gratitude to the staff at Jill’s House and Hospice House for their devoted care. A memorial will be held in Bay View, Michigan in July of 2022. Allen Funeral Home and Crematory, 4155 S. Old State Road 37, Bloomington, have been entrusted with arrangements. Online condolences, photos and memories may be shared with family and friends at www.allencares.com

The family of Dr. Earl Glenford Moehn created this Life Tributes page to make it easy to share your memories.

Send flowers to the Moehn family.