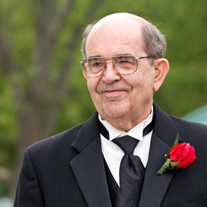 Edward B. Jenkinson, Emeritus Professor of English Education at Indiana University, 89, passed away October 9th, 2020 in Bloomington, Indiana surrounded by his family and team of care givers. Edward was born in Muncie, Indiana to Joseph G. and Alma L. Jenkinson on October 23, 1930. He attended St. Lawrence parochial school in grades one through eight and stood at the top of his class. In the ninth grade he enrolled in Sacred Heart Seminary in Fort Wayne and received a letter of commendation for his score on a national Latin test. He graduated in two and a half years from Muncie Central High School where he was an honor student and had the leading role in several class plays. In 1948 Edward attended Ball State University and graduated three years later. He was editor of the student newspaper and an elected member of the student council. He majored in English with minors in speech and journalism. In 1951 he began two years of teaching English and Spanish at Polk Township High School in Tyner Indiana. Very early in his career Edward was recognized as a superior teacher. Then in 1953 while Ronna was attending Ball State University, Edward met the love of his life. He married Ronna Marasco of West Lafayette, IN on April 10th, 1954. Later that year, he began work on a master’s degree at Indiana University, which he completed in 1956. In 1958 he went to Beirut, Lebanon to teach journalism and advertising and be the advisor to the Student newspaper, Outlook. In June of 1960 Edward returned to the United States to become an Assistant Professor, Coordinator of English Language Arts for Indiana University Bloomington. By 1963 Edward was the Coordinator of the English Curriculum Study Center and was later appointed Director. Early in his career he became Full Professor, one of the few to earn that distinction with only Master’s Degree. Edward received Indiana University’s Gorman Teaching award for creative and excellence in teaching in 1984. In 1985 he received the AMACO Distinguished Teaching award and the Distinguished Alumnus Award from Ball State University. In 1988 Edward was Senior Fellow for Phi Delta Kappa. Prior to his retirement from the Indiana University School of Education, he was the Director of Student Teaching. Edward was known throughout the United States for his fight against censorship in public schools and was a champion for the freedom to learn. Edward is preceded in death by his wife Ronna M. Jenkinson; his parents, Joseph and Alma Jenkinson; his brother Louis Jenkinson; his brother Richard Jenkinson; his sister Agnes Bell; his sister Dorothy Bezy; his nephew Roger Jenkinson; his niece Rebecca Boyce; his niece Mary Katherine Dungan; and his nephew Richard Jenkinson, Jr. Edward is survived by his son Mark (Maggie) Jenkinson of Winnebago, IL; his daughter Andrea (Carlos) Jenkinson-Saenz of Austin, TX; and his son Nick Jenkinson of Bloomington, IN; his grandson Colewyn Saenz of San Antonio, TX; and his granddaughter Isabella Saenz of Austin, TX; his sister Bernice Reese of Muncie, IN; his niece Katheryn Van Oosting, IL; his niece Anna Marillo, MI, his nephew Edward Bell, MI; his nephew Andrew Bell, MI; his niece Christina Pugh, MI; his nephew Alfred Bell, MI; his niece Celeste Magers, MI; his nephew John Bezy, IN; his nephew James Bezy, IN; his niece Sharon Rauber NY; his nephew Joseph Jenkinson, IN; his nephew Robert Reese, IN; his niece BJ Delk, IN; and over 55 great nieces and nephews; and many great-great nieces and nephews. Services to be scheduled at a later date at St. Paul Catholic Center in Bloomington, Indiana. Interment to follow at a later date for immediate family only. In lieu of flowers donations may be made to the Parkinson’s Foundation.

Edward B. Jenkinson, Emeritus Professor of English Education at Indiana University, 89, passed away October 9th, 2020 in Bloomington, Indiana surrounded by his family and team of care givers. Edward was born in Muncie, Indiana to Joseph G.... View Obituary & Service Information

The family of Edward B. Jenkinson created this Life Tributes page to make it easy to share your memories.

Send flowers to the Jenkinson family.