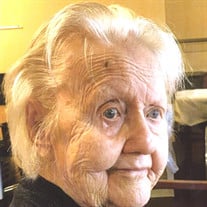 Eva Pauline (Barrow) Hollars left a rich and loving legacy for her 7 children, 19 grandchildren, 27 great grandchildren, and 17 great-great grandchildren. They will forever cherish her gentle spirit and love for all children and her tender compassion for the many dogs and cats she owned. Eva passed from this life peacefully on August 29 at the Owen Valley Health Campus in Spencer, IN, where she had lived in the Legacy unit for the past several years. She was loved and respected by everyone she met. Born January 8, 1921, in Monroe County, Eva was the daughter of Vessie Mae (Hazel) Barrow and John Thomas Barrow. She married Roland Hollars in 1936, and after nearly 54 years of marriage, he went to his eternal home in 1990. Eva and Roland had seven children, 3 of whom preceded her in death: Barbara Blake, her oldest daughter; Donald Hollars, her middle son; and Deborah Hollars, her youngest daughter. In addition, she was preceded in death by her granddaughter, Beth Ann (Blake) Knox; her grandsons, Craig Hollars and John Michael Hollars; and her great grandson, Blake Knox. She is survived by her four children including her son, Ron (Mary Alice) Hollars; her daughter, Linda (Dale) Fisher; her son, Michael (Mary Louise) Hollars; and her son, Larry (Jackie) Hollars; her daughter-in-law, Saundra Hollars, Don’s widow, and her remaining 16 grandchildren, 26 great grandchildren, and 17 great-great grandchildren. Eva enjoyed working at RCA for 29 years and she truly loved camping and fishing with her family. After both she and Roland retired, they could often be found on Lake Monroe early in the morning, fishing. She was never at a loss for words, and her family often retell some of the very special stories that she shared. Eva was a devout Christian and attended the 11th Street Pentecostal Faith Assembly before she was confined to the Owen Valley Health Campus, and attended the Owen Valley services and activities as often as she was able. Visitation will be held between 11AM to 1PM on Tuesday, September 1, 2020, at Allen Funeral Home and Crematory 4155 South Old State Road 37. Funeral services will immediately follow at 1 pm. Please remember that masks are required and social distancing requirements will be followed. The funeral will also be streaming at the Allen Funeral Home Bloomington YouTube channel during the service and it can be accessed at the Allen Funeral Home website after the service. In lieu of flowers, memorial contributions may be made to the Bloomington Animal Shelter, 3410 South Walnut Street. Online condolences, photos and memories may be shared with family and friends at www.allencares.com.

The family of Eva Pauline Hollars created this Life Tributes page to make it easy to share your memories.

Send flowers to the Hollars family.