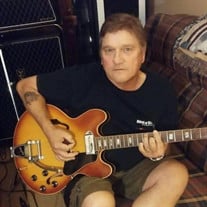 Garry Clyde Frederick, 65, of Bloomington, IN passed away Sunday January 17, 2021 at IU Health Bloomington hospital. He was born January 28,1955 in Vincennes, IN. Garry was the son of Robert Frederick and Mary Catherine (Blackburn) Frederick. He attended Lincoln High school in Vincennes. Garry was in car sales and management in southern IN. Garry was a KICK ASS guitar player. He loved to tell jokes and make people laugh. He had a way of getting under your skin, but you just couldn’t help but love him. He went against the grain. Garry had his demons as we all do but he had a heart of gold and a truly caring nature. He loved his wife, kids and grandkids so much and even though he couldn’t always be present none of us had to doubt he loved us. “Papaw” will be extremely missed. Garry is survived by his wife Debbie (Vaughn) Frederick; his son Chris Frederick and daughter in law Amanda (Ellis) Frederick; his son Dustin Slaven and daughter in law Angela (Kirkley) Slaven; his daughter Jaimie Frederick; his son Tyler Frederick; his grandchildren were Jayci Frederick, Beau Frederick, Sophia Frederick, Destiny Slaven, Serenity Slaven, Harmony Slaven, Mykenzi Molin, Ali Molin, Finn Krauklis and Sawyer Krauklis.his brothers Terry Frederick and Fred “Skip” Heuby; his sister Pam Crowe, along with many cousins, nieces and nephews. Garry was proceeded in death by his father Robert Frederick; mother Mary Catherine (Blackburn) Frederick; his brother Robert (Bob) Frederick; and his sister Paula (Heuby) Wilson. Garry’s celebration of life will be at Allen Funeral Home and Crematory 4155 South Old State Road 37 on Friday, January 22, 2021 from 6-8 . In lieu of flowers the family asks to donate to the American Heart Association on Garry’s behalf.

Garry Clyde Frederick, 65, of Bloomington, IN passed away Sunday January 17, 2021 at IU Health Bloomington hospital. He was born January 28,1955 in Vincennes, IN. Garry was the son of Robert Frederick and Mary Catherine (Blackburn) Frederick.... View Obituary & Service Information

The family of Garry Clyde Frederick created this Life Tributes page to make it easy to share your memories.

Garry Clyde Frederick, 65, of Bloomington, IN passed away Sunday...

Send flowers to the Frederick family.