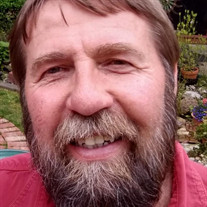 Gary Alan Benassi, age 69, of Bloomington, IN, went home to be with his Lord and Savior at 5:06 p.m. on Sunday, December 19, 2021 at IU Methodist Hospital in Indianapolis with his loving wife, Teresa Benassi, and devoted niece, Maureen Langley, at his side. He was the son of Denzil and Merladene Benassi. Gary is survived by his wife, Teresa (Miller) Benassi, his dog, Jagger, and cat, Hazel. He is also survived by 21 very special nieces and nephews whom he greatly loved as his own children, and one sister, Lori (Paul) Shaver, of Muncie, IN. He had two paternal half-brothers and half-sisters, and a stepfather, Jim Cawood. He was preceded in death by his parents, Denzil Benassi, and Merladene Cawood, paternal grandparents Otillo and Gladys Benassi, maternal grandparents Henry and Viola Tweedy, and half-brother Clint Inman. Gary loved God and sought to do His will. He pastored Christ’s Chapel for the past year. He loved home and family life. He was a custom home builder for 27 years, then worked in Contractor Sales at Lowe’s for five years, before retiring in 2019. He was a devoted, loving, and faithful husband. Teresa said he was the best thing that ever happened to her besides getting saved and Gary was instrumental in leading her to Christ. Gary was a United States Marine, serving in the Vietnam war from July 1971 to July 1973. A private burial will be for the family at New Providence Cemetery in Cloverdale, IN. A memorial service will be held Saturday April 30, 2022 at McCormick's Creek State Park in the CCC Recreational Bldg. It will begin at 2 p.m. family and friends are invited to attend. In lieu of flowers, donations given to his wife, Teresa, would be appreciated. Allen Funeral Home and Crematory have been entrusted with arrangements. Online condolences, photos and memories may be shared with family and friends at www.allencares.com.

Gary Alan Benassi, age 69, of Bloomington, IN, went home to be with his Lord and Savior at 5:06 p.m. on Sunday, December 19, 2021 at IU Methodist Hospital in Indianapolis with his loving wife, Teresa Benassi, and devoted niece, Maureen Langley,... View Obituary & Service Information

The family of Gary Alan Benassi created this Life Tributes page to make it easy to share your memories.

Send flowers to the Benassi family.