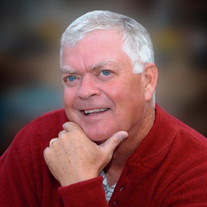 Gary Frederick Cousins, 72, of Bloomington passed away Tuesday, January 11, 2022 at the IU Health Bloomington Hospital. He was born on June 10, 1949 in Avon, Illinois the son of George Forbes and Martha Louise (VanWinkle) Cousins. Gary was a 1967 graduate of University High School in Bloomington. He enrolled at IU, then transferred to DePauw University where he played football before suffering a leg injury. He then returned to Indiana University and received his Bachelor's Degree in Physical Education in 1972. Gary was an assistant Golf Pro at Indiana University Golf Course and at the Golf Club at Eagle Point. He was an instructor for the Indiana University Department of Physical Education for several years before retiring. He was an exceptionally talented artist, and he had a magnetic personality and was always fun to be around. He was an avid sports fan. He loved IU sports, Bloomington North and South Sports, playing golf, and playing basketball. He enjoyed the outdoors, camping, hiking and backpacking in the mountains. He loved his dogs, Bobby and Marti who were his constant companions. He loved seeing videos of his grandchildren in their many sports activities, and he enjoyed spending time with his family and friends. He will be greatly missed. Gary is survived by his daughter, Betsy (Jason) Mulder and their children, Collin, Elena, Olivia, and Luke of Powell, Ohio; one stepson, Jereme Evan Fox and his daughter, Lauren of Bloomington; his sister, Linda Wehr of Ann Arbor, MI; his brother Paul (Becky) Cousins of Oklahoma City, OK; and several nieces and nephews. His parents, George and Martha; wife, Lucinda; and son, Brian Cousins; preceded him in death. A Celebration of Life will take place at a later date. Cremation Rites have been accorded. In lieu of flowers, donations in his memory may be made to CILRA Lab Rescue & Adoption at www.cilra.org. Allen Funeral Home and Crematory have been entrusted with arrangements. Online condolences, photos and memories may be shared with family and friends at www.allencares.com.

Gary Frederick Cousins, 72, of Bloomington passed away Tuesday, January 11, 2022 at the IU Health Bloomington Hospital. He was born on June 10, 1949 in Avon, Illinois the son of George Forbes and Martha Louise (VanWinkle) Cousins. Gary was a... View Obituary & Service Information

The family of Gary Frederick Cousins created this Life Tributes page to make it easy to share your memories.

Send flowers to the Cousins family.