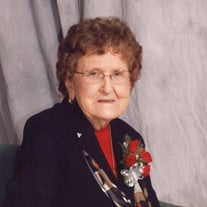 Geneva Stevens, 103, of Bloomington, Indiana died April 22 at Garden Villa in Bloomington. Born on December 16, 1917 in Greene County, she was the daughter of Gilla (Haywood) and John Hauck. Geneva was known for her kind and loving heart, her generous nature and strong faith in God. She was retired from the Bloomington Hospital Laboratory where she worked for 15 years. Geneva also worked at Sarkes Tarzian for 17 years and the Bloomington Convalescent Center for several years. She was a member of the West Second Street Church of Christ, and rejoiced in serving the Lord by helping others in any way that she could. She also belonged to the Walk-A-Lot Homemakers Club, Red Hat Society and was an RSVP volunteer. She served on the Monroe County Fair Board for 5 years and was a Sunday School teacher for many years. Geneva was one of the original organizers of the Sanders School PTA. She also helped her husband with the Hustling Hoosiers 4-H Club for 35 years. Geneva loved the holidays and spending time with her family. She enjoyed camping, boating, travelling, flower gardening, sewing, decorating, reading, cooking, crafts, and doll collecting. She also enjoyed and excelled at oil painting, which she took up in her late 60’s. Geneva participated in the Monroe County Homemakers Style Show for a number of years and exhibited countless projects at the Monroe County Fair up to the age of 100. Geneva received many awards and certificates throughout her adult life for her involvement and volunteer work in the community. She was recognized as the “Monroe County Mother of the Year” in 1959. Other honors included being the recipient of the Northside Exchange Club of Bloomington 2007 Book of Golden Deeds Award, the President’s Volunteer Service Award, the Area 10 Agency on Aging 2005 Senior Salute, the Times Herald Heart and Hand Award, the Monroe County Homemaker of the Year Award, the Local Council of Women, Inc. Agape Award and was nominated for the Older Woman of the Year Award, just to mention a few. When asked about her greatest accomplishment, she replied “Without a doubt, raising my children!” She is survived by two sons, Larry (Kay) Stevens of Bloomington, and Joe (Darlene) Stevens of Aurora, CO and one daughter, Jill (Mike) Cecil of Washington, IN; 10 grandchildren, John (Karen) Stevens, Susan (Rob) Nicholls, Cassie (Adam) Abrell, Natalie (Jeff) Albrinck, Andrea (Jeff) Bladel, Kristen Stevens, Nathan (Alicia) Cecil, Maggie (Jon) Sola, Josh (Jami) Cecil, and Sam (Jessica) Stevens; 27 great grandchildren, 6 great-great grandchildren and a number of nieces and nephews. She was preceded in death by her husband of 52 years, Emerson Stevens, one son, John Stevens, one grandson, Michael J. Stevens, one great grandson, and her sister Velma Knoy. Funeral services for Geneva will be held Tuesday, April 27, 2021 at 1:00PM at Allen Funeral Home and Crematory 4155 South Old State Road 37. Burial will follow in the Valhalla Memory Gardens. Visitation will also be held on Tuesday, April 27, 2021 from 11:00AM to 1:00PM at Allen Funeral Home and Crematory. In light of the on going Covid-19 issues, masks will be required while in attendance at either of these events. In lieu of flowers the family requests that memorial contributions be made to the Monroe County Fair or a charity of the donors choice in the name of Geneva Stevens. Online condolences, photos, and memories may be shared with family and friends at www.allencares.com

Geneva Stevens, 103, of Bloomington, Indiana died April 22 at Garden Villa in Bloomington. Born on December 16, 1917 in Greene County, she was the daughter of Gilla (Haywood) and John Hauck. Geneva was known for her kind and loving heart,... View Obituary & Service Information

The family of Geneva Stevens created this Life Tributes page to make it easy to share your memories.

Send flowers to the Stevens family.