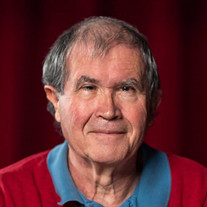 Geoff died at his home, while surrounded by his family, on December 20, a short time after being diagnosed with pancreatic cancer. During his final weeks, Geoff wanted nothing more than to spend time with the people he loved, especially his wife of fifty years, Karen, whom he adored. Geoff was born on December 24, 1947, in Boston, Massachusetts, to Albert and Ruth Conrad. He is survived by his wife Karen (née Hildebrant) and his three sons: Matthew, Peter (Jennifer), and Marc (Sarah). He relished being a grandfather to his three grandsons Eben, Oliver, and Geoff, and he delighted in the inside jokes and silly games they shared together. He is also survived by his two brothers, Peter and Marc, and his three sisters, Kathy Grossman, Judy Millener, and Laurie McBride, as well as many nieces and nephews. Geoff fell in love with archaeology as a child and often said that the 1954 Scrooge McDuck comic book “The Seven Cities of Cibola” was what first sparked his excitement for archaeology. He pursued his interest in past cultures, earning both undergraduate and graduate degrees in anthropology from Harvard University. His study of the pre-Incan Chimú culture at Chan Chan on the north coast of Peru formed the basis of his PhD dissertation. He worked as a professor of archaeology at Harvard until 1983, when he was hired by Indiana University Bloomington as a professor of archaeology and also as the director of the Mathers Museum of World Cultures (now the IU Museum of Archaeology and Anthropology). In the 1990s he switched his focus from pre-Columbian Peruvian cultures to the Taíno culture of the Caribbean in the Dominican Republic, studying the Taíno chiefdoms encountered by Christopher Columbus and other early Spanish explorers of the Caribbean. In addition to his teaching and museum work, he served in multiple administrative roles for IU, including serving as the chair of the anthropology department and working in the Office of the Vice Provost for Research. Geoff always enjoyed observing the songbirds in his backyard. After retirement, he enthusiastically took up photography, focusing on these birds and other wildlife seen around the neighborhood as well as on his travels with Karen to many locations around the world. He was an avid reader, did the New York Times crossword puzzle daily, and enjoyed summer vacations on a small island off the Maine coast. He had a sharp wit and an air of kindness that endeared him to his colleagues and friends. A celebration of his life is planned for 2022. In lieu of flowers, please consider a contribution to the Sassafras Audubon Society or IU’s Emeriti House.

Geoff died at his home, while surrounded by his family, on December 20, a short time after being diagnosed with pancreatic cancer. During his final weeks, Geoff wanted nothing more than to spend time with the people he loved, especially his... View Obituary & Service Information

The family of Geoffrey Wentworth Conrad created this Life Tributes page to make it easy to share your memories.

Geoff died at his home, while surrounded by his family, on December...

Send flowers to the Conrad family.