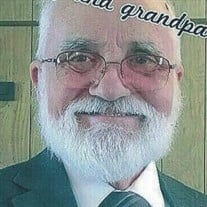 George Henry Sites, 79, of Bloomington passed away on Friday, August 6, 2021 at the IU Health Bloomington Hospital in Bloomington after a battle with covid. He was born on May 11, 1942 in Watsuka, Illinois the son of Edwin Forrest and Lillian Isabelle (Wiggs) Sites. George was a 1960 graduate of Watseka High School in Watseka, IL and attended Lincoln Christian College in Lincoln, IL. He married Mary Lucille Fyffe on July 4, 1976 in Spencer, Indiana they were happily married forty-five years. George was a relief driver for MCCSC and drove the athletic bus for Bloomington High School, Bloomington High School South and Bloomington High School North until 1986. He worked for Radio Shack and JC Penny. George was a minister and Pastor for over 50 years year’s serving as pastor at Versailes Christian Church in Versailes IL; Bunker Hill Christian Church in Salem IN; Walnut street Christian Church and Maple Grove Christian Church both in Bloomington; Furnace Christian Church in Bloomfield and was currently the Pastor of Guthrie Christian Church in Bedford. George enjoyed walking at the mall, golfing, telling jokes, watching planes at the airport and watching races at the Bloomington Speedway. . He loved his family and especially loved spending time with his granddaughters. He will be greatly missed by all his family and friends, and church community. George is survived by his wife, Mary L. Sites of Bloomington; his daughter, Jessica (Kevin) Chambers of Bloomington; two granddaughters, Cindy Chambers and Katie Chambers of Bloomington; sisters, Ethel Fargussen of Decatur, IL; and Edwina Conley of Tulsa, OK; brothers, Bill Sites and Dan (Gail) Sites both of Mexico, MO; Rodney (Wink) Sites of Guymon, OK; and several nieces and nephews and cousins. He was preceded in death by his parents, his brother, Edwin Sites. A funeral service will be held at 10:00am Saturday August 14, 2021 at the Allen Funeral Home 4155 S. Old St Rd 37 Bloomington. With Pastor Richard Wilson officiating. Burial will follow at Valhalla Memory Gardens. A visitation will be held from 4:00pm to 8:00pm Friday, August 13, 2021 at the funeral home and Saturday from 10:00am to service at the funeral home.. Memorial contributions may be made to the family. Allen Funeral Home and Crematory have been entrusted with arrangements. Online condolences, photos and memories may be shared with family and friends at www.allencares.com

George Henry Sites, 79, of Bloomington passed away on Friday, August 6, 2021 at the IU Health Bloomington Hospital in Bloomington after a battle with covid. He was born on May 11, 1942 in Watsuka, Illinois the son of Edwin Forrest and Lillian... View Obituary & Service Information

The family of George Henry Sites created this Life Tributes page to make it easy to share your memories.

George Henry Sites, 79, of Bloomington passed away on Friday,...

Send flowers to the Sites family.