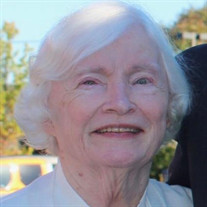 Geraldine Maddox True, 90, of Bloomington, passed on Thursday, February 25, 2021 Geraldine Maddox was born April 27, 1930 in Bedford, Indiana to Louise Katherine Watson (Maddox) and Robert Maddox. Gerry was an accomplished student receiving a full scholarship to Indiana University as an undergraduate. She was a member of Delta Delta Delta sorority continuing her affiliation as an alumna. She took a European tour after graduation in 1952, returning to the Bedford area to teach French and History at Marshall Township School. Gerry and Jay Wood Collins met while they were students at IU. In 1953, they married and started a family moving from Georgia, to Florida, and finally to Indiana for Jay’s work. On December 29, 1958, Jay perished in a plane crash near Frankfort, Indiana on a business trip. During the six years that followed, with the support and guidance of family, friends, and Jay’s fraternity brothers, Gerry got her Master’s in Education, built the home that would be her residence until her death, and raised three children as a single parent. In June of 1964, she married architect Joseph D. True, Jr., her high school sweetheart. The True family became official with the addition of brother Jim a year later. Joe and Gerry were together 56 years. They traveled the US and abroad, often with Gerry’s sister, Jean, and her husband, Joe Atkins, researching genealogy in libraries or going to Broadway plays. Joe took Gerry to Frank Sinatra and Brian Stokes Mitchell concerts again and again without complaint or jealousy, secretly wishing he was golfing. Gerry’s focus was always her family. She supervised, supported, and facilitated her four children throughout their lives. She had a wonderful group of close friends who surrounded her socially for many years. She was a talented bridge player, a voracious reader, and crossword enthusiast. A possessed IU basketball fan (attending home games regularly for 45 years), she coached the Hoosiers from her seat in the old IU Fieldhouse, Assembly Hall, and in front of the television until recently. She was also a proud BHSS fan, but as her grandchildren came along, her pride in their activities extended her allegiance to other Bloomington area schools. Gerry will be remembered by her family for her intellect, kindness, self-sacrifice, and strength. She was the one who brought us all together in a place we call home and taught us what real love means. She loved us all to crumbs. Gerry was predeceased by her parents, both husbands, and her twin brother, Don Maddox. She is survived by her sister, Jean Atkins (Columbus, IN); her four children (all of Bloomington) Jennifer Collins, Patrick Jay True, (Sarah Eherenman) Jay Wood True (Jennifer Grossman), and James Scott True (Rebecca Keith); her grandchildren (all of Bloomington unless noted): Parker Collins (Hilton Head, SC), Hayley Schilling (Chicago, IL), Kate True (Los Angeles, CA), Kyle True, Caleb True; Madison True, Taylor True Kinser, Jessica True (Mission, KS), Connor True, Rebecca and Enrique Garcia (St. Louis, MO), Donovan Keith-Reeves; and four great-grandchildren The family is planning a gathering on Hilton Head Island later this year in memoriam of Gerry and Joe and the times spent in their favorite vacation spot over the last forty years. Allen Funeral Home and Crematory have been entrusted with arrangements. Online condolences, photos and memories may be shared with family and friends at www.allencares.com

The family of Geraldine Maddox True created this Life Tributes page to make it easy to share your memories.

Send flowers to the True family.