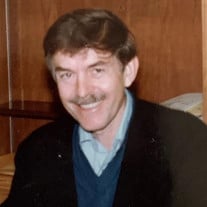 Hugo Kunoff, age 92 was a longtime Bloomington resident and librarian for Western European languages at Indiana University. His life ended peacefully at Hospice House on May 5th, 2021. In his final hours his wife Karla (nee Skorsinski) and sons Mark and Peter were by his side reminding him how much they loved him. The story of his life has been an incredible inspiration to the family as well as his friends and colleagues. His family was always priority one. Even in his final hours he expressed concern for his wife and sons. Hugo was born to Alexander and Amalia Kunoff on April 1, 1929 in Tiege, Ukraine a small village near the Molotschna river. From the beginning he was an excellent student and when guests came to visit he would recite poems he had memorized. By the age of 16 he was displaced from his family during World War II. In 1945 the German army forced recruitment on all able bodied men, including teenaged boys where they were sent to dig tank trenches near Cuxhaven. After the war as a young man, he gained employment with the British Royal Air Force. In 1952 he immigrated to the U.S. and worked in the steel mills of Cleveland, Ohio. Immigrants were not immune to the draft and in no time he was a G.I. stationed at Fort Knox, Tennessee and later in Bayreuth, Germany. By 1958 he had earned his undergraduate degree from the University of the Americas in Mexico City and was on the Dean’s list 5 times. He loved Mexican culture, art, was an avid fan of Mariachi music, and he and Karla would return many times in their retirement. After his masters degree at Columbia University in 1962, he traveled to Hamburg, Germany to continue his studies and in “one enchanted evening” (Hugo’s favorite song) he would meet his wife Karla. After a whirlwind romance he and Karla started their lives in New York City where Hugo worked as a librarian for the public library. A year later he accepted a position as a subject specialist for modern languages at Indiana University in Bloomington, Indiana where he also would earn his Ph.D. in Library Science. Hugo was an avid book reader and every 2 weeks he would take home a new stack of books. His work afforded him the opportunity to travel to Europe several times with family in tow. After retiring in 1994 at age 64, he worked remotely for Harvard University for nearly three years. Karla and he enjoyed multiple trips during retirement, including Europe, Canada, Egypt, Turkey and Mexico. He was an accomplished tennis player, an excellent chess player, an expert gardener and loved to bake dense multigrain breads on weekends. Hugo is survived by his wife of 59 years, Karla; his sister Inna; and his sons Mark (Cydney) and Peter (Becky). He leaves behind his 4 grandchildren; Gabriella, Ethan, Olivia and Matthew. A celebration of life gathering will be announced. In lieu of flowers, donations can made in Hugo’s name to the Bloomington Community Kitchen online [https://give.idonate.com/communitykitchen/spring] or by mail to PO Box 3286, Bloomington, IN 47402-3286. Allen Funeral Home and Crematory have been entrusted with arrangements. Online condolences, photos and memories may be shared with family and friends at www.allencares.com

Hugo Kunoff, age 92 was a longtime Bloomington resident and librarian for Western European languages at Indiana University. His life ended peacefully at Hospice House on May 5th, 2021. In his final hours his wife Karla (nee Skorsinski) and sons... View Obituary & Service Information

The family of Hugo Kunoff created this Life Tributes page to make it easy to share your memories.

Hugo Kunoff, age 92 was a longtime Bloomington resident and librarian...

Send flowers to the Kunoff family.