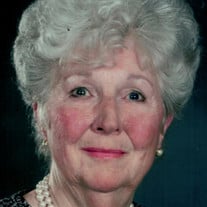 Imogene (Wrightsman) Stevens, 89, of Bloomington, Indiana passed away on Thursday, October 29, 2020 at Monroe Place in Bloomington, Indiana. Imogene was born on September 28, 1931 in Brown County, Indiana the daughter of Orville John and Effie Jane (Bradley) Wrightsman. She attended Nashville High School in Brown County, Indiana, and also attended Indiana University. Imogene married Ernest McClelland Stevens on August 6, 1949 in Bloomington, Indiana. She worked at RCA and was also employed for 18 years at Indiana University, retiring in February of 1990. She was baptized in the Pentecostal faith and was active in church until it became difficult due to poor health. Imogene had a deep belief in God’s word and kept her bible close as she depended on His daily promises. Her family was precious to her and she enjoyed spending time with them. She will be deeply missed. Imogene is survived by her sons, Mark (Beverly) Stevens of Solsberry; David (Sherry) Stevens of Bloomington; three grandchildren, Lindsey Stevens; Jeremiah (Audrey) Stevens; Eric (Shelby) Stevens; one great granddaughter, Adeline Stevens; a brother, Albert (Mary) Wrightsman of Statesville NC; two sisters, Mary Ellen Brady of Jacksonville, FL; Velma (Conrad) Callahan of Bloomington; and several nieces, nephews and cousins. She was preceded in death by her parents, husband Ernest, twin infant sons, seven brothers, James, Charles, Clifford, Orville Jr, Myron, John and Infant Morris Wrightsman; two sisters, Alice Owens and Doris Trotter. A funeral service will be held on Tuesday, November 3, 2020 at 1:00pm at the Allen Funeral Home 4155 S. Old St Rd 37, Bloomington. Visitation will be held at the funeral home from 12:00 Noon to the time of service on Tuesday, November 3, 2020. Burial will follow at Valhalla Memory Gardens. Memorial contributions may be made to the Southern Care Hospice in Imogene’s name. Allen Funeral Home and Crematory have been entrusted with arrangements. Online condolences, photos, and memories may be shared with family and friends at www.allencares.com

The family of Imogene (Wrightsman) Stevens created this Life Tributes page to make it easy to share your memories.

Send flowers to the Stevens family.