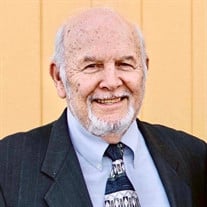 J Carlyle Lee, 86, of Bloomington passed away in the early morning of Tuesday, August 3, 2021. He was born July 14, 1935 in Ossian, Indiana to Mervin and Esther (Baker) Lee. J was a 1953 graduate of Scotch College in Melbourne, Australia, and he graduated with his Bachelor’s Degree in Mechanical Engineering from Purdue University. J was also a member of the Delta Chi fraternity. On June 17, 1961, J married the love of his life, Nina Grace Bower, in Bloomington, IN. They were happily married for 60 years. J worked for Johnson Outboard Marine in Waukegan, IL and then for General Electric as a sales engineer in Wilmington, DE. In 1968, he started B & L Sheet Metal & Roofing with his father-in-law, George Bower, Sr., and ran the business until 2008. In 1973, J accepted Jesus Christ as his personal Savior, which was a life-altering moment. From that point forward, his purpose in life was focused on sharing the love of Christ with everyone. He was passionate about teaching the Bible and helping people grow in their faith. He and Nina were also generous supporters of various missions and ministries throughout the world. J adored his family and prayed for each of them daily. He will be greatly missed. J is survived by his wife Nina; his children Jayna (Dan) Mirer of Bloomington; Michele (Robert) Nugen of Columbus, OH; David (Sandy) Lee of Bloomington; Deborah (Jeffrey) Bundy of Bloomington; and Stephen (Tammy) Lee of Bloomington; his fourteen grandchildren and their spouses, Jacob (Courtney); Austin (Sarah); Ryan; Caleb; Hannah; Emily (Johnny); Kevin; Cooper; Ethan; Noelle; Nicholas; Steven (Marilyn); Jackson, and Carolyn; his great grand-daughter, Eleanor; his brother David (Betty) Lee of Florida; and many nieces and nephews. He was preceded in death by his parents, his grandson Andrew Mirer, and his brother Michael Lee. A Celebration of Life service will be held at 2:00pm Saturday, August 28, 2021 at the Allen Funeral Home 4155 S. Old St Rd 37 Bloomington. "Donations in lieu of flowers can be made to one of Dad's favorite ministries, The Voice of the Martyrs: A Bible for Every Believer. Your donation will help put bibles in the hands of people all over the world." https://www.persecution.com/2019-04-bibles/?_source_code=WHPB20K Allen Funeral Home and Crematory have been entrusted with arrangements. Online condolences, photos and memories may be shared with family and friends at www.allencares.com

J Carlyle Lee, 86, of Bloomington passed away in the early morning of Tuesday, August 3, 2021. He was born July 14, 1935 in Ossian, Indiana to Mervin and Esther (Baker) Lee. J was a 1953 graduate of Scotch College in Melbourne, Australia,... View Obituary & Service Information

The family of J Carlyle Lee created this Life Tributes page to make it easy to share your memories.

J Carlyle Lee, 86, of Bloomington passed away in the early morning...

Send flowers to the Lee family.