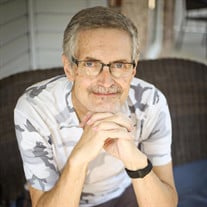 James Carl Bohn was born in Terre Haute, Indiana, on October 1, 1956, and died at home August 18, 2020, after a three-month battle with pancreatic cancer. Jim was a 37-year employee at Naval Surface Warfare Center Crane until his retirement in October 2015, after which he returned part-time as a contractor until his illness forced him into a second retirement in June 2020. Jim is survived by his wife, Jenni (Reeves), his daughter Kim and his grandson Ethan, along with his half-brother, Matt (Lisa) Wright of Iowa, and his half-sister Donna (Wright) Lobb, of Minnesota, several aunts, an uncle, and many cousins, nieces and nephews. Jim was adopted as a three-day-old infant and raised by Carl and Marie (Farley) Bohn of Loogootee, who preceded him in death in 1977 and 1995, respectively. He was also preceded in death by his birthmother, Nancy (Armes) Wright, of Iowa, in 2009. Jim graduated from Loogootee High School in 1974, where he played trumpet in the band and served as student manager of the boys' basketball team. He completed an Associate's degree in Computer Programming at Vincennes University in 1976 and an Associate's in Business Management at Vincennes University - Jasper Center in 1978. Jim was a member of Loogootee Christian Church from the time he was born until he and Jenni married and moved to Bloomington in 1983. From that point on, he was a member of Sherwood Oaks Christian Church, where he worked for 33 years as part of the visual/media/production team, growing with technology as the ministry went from a slide carousel projecting lyrics onto a screen up front to a multi-camera system with a bank of monitors and live streaming. He also spent more than 25 years being "The Sign Guy," the one who was responsible for putting events or quotes on the church's sign at the front of the property. Besides production, Jim was a leader in the annual Furniture Giveaway for International Students, served for a time as a deacon, was the "Church Jesus" when one was needed for dramatic productions during the 1990s, and, along with Jenni, "adopted" many students and young adults through the church's Adopt-A-Student ministry, opening his home to more than 30 college students and young adults (and their friends, roommates, and significant others) over a 13-year stretch. Outside of church, Jim spent several years as a volunteer tour guide at West Baden Springs Hotel during the time it was being renovated for reopening - a position which seamlessly combined his love for people with his love for history. For the 2019-2020 year, he volunteered as a greeter at Simon-Skjodt Assembly Hall/Cook Hall, this time indulging his love of people with his love of IU basketball (both men's and women's). Jim loved classic rock music (especially The Beatles), nice cars (especially Corvettes), and history (especially World War II - in some part because his father was a WWII veteran). He was always interested in people and their stories (especially people from other countries and cultures), and his favorite vacation spot was a cabin in the mountains (especially if it included a hot tub). But most of all, Jim was devoted to his family and was one of those old-school people who would do anything in his power to provide for his wife, daughter and grandson. Often described by others as gentle and kind, his family knew him to be self-sacrificing and steady - the anchor in the storm. It is that kindness, that gentleness, that self-sacrifice and that steadiness that will be missed the most. Visitation will be held Saturday, August 22nd, at Sherwood Oaks Christian Church from 10:00 a.m. to 12:00 noon, with the service to follow beginning at 12:00 noon. The service will also be livestreamed - watch CaringBridge and Facebook for the URL to watch it. Following the service (beginning around 1:30 or 2:00), there will be an open house at the Bohns' home to provide a time for open air visiting and chat. Contact Jenni or Kim if you need the address. In lieu of flowers, donations can be made to IU Health Hospice (2810 S. Deborah Dr., Bloomington, IN 47403), an amazing organization whose nurses were invaluable in providing care for Jim throughout his illness.

James Carl Bohn was born in Terre Haute, Indiana, on October 1, 1956, and died at home August 18, 2020, after a three-month battle with pancreatic cancer. Jim was a 37-year employee at Naval Surface Warfare Center Crane until his retirement... View Obituary & Service Information

The family of James Carl Bohn created this Life Tributes page to make it easy to share your memories.

Send flowers to the Bohn family.