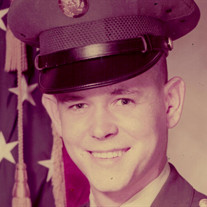 James D. Mize, 69, of Bloomington passed away on Thursday, August 19, 2021 at Brown County Health and Living in Nashville, Indiana. He was born on June 23, 1952 in Crawfordsville, Indiana the son of James Clarence and Helen Jean (Taugher) Mize. He was a 1970 graduate of Bloomington High School. James was a US Army Veteran serving during the Vietnam War. He was a member of Fraternal Order of Eagles, American Legion Post 18, and V.F.W. Post 604 all in Bloomington. James worked for Best Beers Distributing in Bloomington for several years. He was the owner of The Slide, a bar in Aurora, Indiana. He also worked at Marsh, Mr. D’s, and Kroger all in Bloomington. Later he worked at the Eagle Pointe Golf Course as a groundskeeper. James was an avid golfer and sports fan. He loved watching the Reds, Colts, and IU. James enjoyed dogs, especially Dixie and Bailey. He will be greatly missed. James is survived by his sisters, Shirley Gromer (Chuck) of Bloomington; Peggy McCorvie (Bob Creighton) of Bloomington; his niece, Leslie Flynn (Kevin) of Springville. He was preceded in death by his parents, and grandparents Doyle & Lydia Taugher and Louis & Faye Mize. A memorial service will be held at 6:00 pm Thursday, August 26, 2021 at the Allen Funeral Home 4155 S. Old St Rd 37 Bloomington. Rev. Ray New will be officiating. Visitation will be held from 4:00 pm to 6:00 pm Thursday at the funeral home. A private burial will be held for the family at Mt. Calvary Cemetery in Vincennes, Indiana. Cremation Rites have been accorded. Memorial contributions may be made to the Wounded Warriors Project or The American Cancer Society. Allen Funeral Home and Crematory have been entrusted with arrangements. Online condolences, photos, and memories may be shared with family and friends at www.allencares.com

James D. Mize, 69, of Bloomington passed away on Thursday, August 19, 2021 at Brown County Health and Living in Nashville, Indiana. He was born on June 23, 1952 in Crawfordsville, Indiana the son of James Clarence and Helen Jean (Taugher) Mize.... View Obituary & Service Information

The family of James D. Mize created this Life Tributes page to make it easy to share your memories.

James D. Mize, 69, of Bloomington passed away on Thursday, August...

Send flowers to the Mize family.