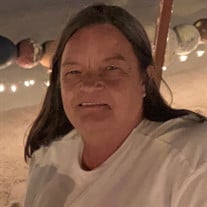 Jaqueline “Jackie” Davis, 57 of Bloomington, IN, passed to her heavenly eternal home on the glorious day of Monday, November 29, 2021. She was at Stonecroft Health Campus with her dear friend Patricia Benson at her bedside. She was born on January 16, 1964 in Loogootee, IN. She was the youngest child of Charles Frank Davis and Rita (Carrico) Davis. Jackie attended High School in Loogootee, IN and later studied Culinary Arts at Ivy Tech in Bloomington, IN. She worked in several different positions doing home healthcare and domestic work as she was always eager to try new things. She was preceded in death by her parents, brothers Larry, Charles Dwight, Martin, Edward and Scott Davis, sisters Karen Wagler and Merriam Porter, nephew John D. Wagler (Karen) and Jeromy Davis (Dwight). She is survived by her brothers Ronald, Richard and Gregory Davis, Sisters Mary Davis and Barbara Spurgeon. Jackie is also survived by nieces and nephews Jason and Jeff (Ronald), William Michael (Karen), Billy Jo (Mary), Jordan, Whitney, Jackie, and Colton (Larry), Joshua, Patricia and Pricilla (Dwight), Charles and Rita (Edward), Tammy (Merriam), Richard Jr, Nathan, Angela, and Jenny (Richard), Brandy, Terry, and Kelly (Barbara), Justin and Tia (Scott) and Cassie and Jessica (Gregory). Jackie had 20 great nieces and 24 great nephews. Jackie was passionate about her faith, friends, fishing, and fun. There was never a dull moment when Jackie was around. She had the gift of making an average day anything but. Jackie made the most of every situation presented to her and embraced most difficulty as a challenge to grow. Everyone who met Jackie quickly became her dear friend. She listened closely to people and celebrated the fact that all of us have our own story to tell. She cared deeply about everyone she met and had an open-door policy at her apartment in Bloomington. Jackie’s faith in a power greater than herself allowed her to accept her diagnosis of terminal brain cancer with grace and courage. She often said people might say, Why me God? But I say Why not me. Her ability to live each day, especially the last weeks of her life full of trials and challenges, was fueled by Christ’s spirit. It enabled her to sustain and grow in inner peace, assurance, love, praise, and ever-present thanksgiving in her heart and on her lips. She often recited the Lord’s Prayer, the Saint Francis Prayer, the Serenity Prayer and Now I Lay Me. Jackie also took comfort from her friendships with Bill W. and Dr. Bob, Jim W., and Roseanne S. The family and friends would like to thank the staff at Stonecroft Health Campus for their compassionate care and to many others who helped Jackie through the last few weeks of her life. Memorial contributions can be sent to the Amethyst House P.O. Box 11, Bloomington, IN 47402. A celebration of Jackie’s life will be held from 2:00pm to 5:00pm on Sunday, December 19, 2021 at the Bloomington Gourmet Catering 5660 W. St Rd 46 Bloomington, Indiana 47404 with a service starting at 2:30pm. Refreshments and fellowship will follow the service. Cremation Rites have been accorded. Allen Funeral Home and Crematory have been entrusted with arrangements. Online condolences, photos and memories may be shared with family and friends at www.allencares.com

Jaqueline &#8220;Jackie&#8221; Davis, 57 of Bloomington, IN, passed to her heavenly eternal home on the glorious day of Monday, November 29, 2021. She was at Stonecroft Health Campus with her dear friend Patricia Benson at her bedside. She was... View Obituary & Service Information

The family of Jaqueline "Jackie" Davis created this Life Tributes page to make it easy to share your memories.

Jaqueline “Jackie” Davis, 57 of Bloomington, IN, passed to her...