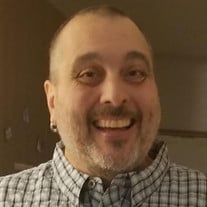 Jared Scot Chaffin, 53, of Ellettsville, Indiana passed away on December 10, 2021 at Franciscan Health Hospital in Indianapolis. He was born on August 6, 1968 in Bloomington, Indiana, the son of Jon Ronald and Janet Lynn (Adkins) Chaffin. He was a 1986 graduate of Owen Valley High School in Spencer. Jared also attended Indiana University and Ivy Tech College in Indianapolis, where he received his Associate Degrees in Nursing and Science. Jared worked as a paramedic for Owen County EMS for several years and was currently a Registered Nurse in the Emergency Department at Monroe Hospital in Bloomington. He was also Chief Deputy Coroner for Monroe County Coroner's Office. Jared was a member of the American Nurses Association. His life-long love of medicine was sparked by loyal viewing of the 1970s T.V. series Emergency! which focused on the work of paramedics. Spending most of his career in emergency medicine, Jared touched and saved hundreds of lives. He loved to help people, and his ability to provide calm, caring support brought comfort to countless patients and their families. Music was one of Jared's passions. He believed music was "good and true," whether he listened to it on an old set of headphones, at a local bar, or at a live concert. He liked all music but was especially connected with rock and blues and was well known for his enduring devotion to AC/DC. Everything about aviation fascinated Jared. He loved flight simulators and learning about planes. His favorite part of a flight was the takeoff as the aircraft left the confines of earth. Jared loved his children and grandchildren beyond measure and enjoyed spending time with his family and friends. Quick to smile and chat, Jared never met a stranger. He will be greatly missed. Jared is survived by his fiancé, Elizabeth King of Ellettsville; his children, Joan and her husband Brett Miles of Ellettsville; Jana Chaffin of Ellettsville; Jacob Chaffin of Indianapolis; Jalyn Chaffin of Ellettsville; and Shelby Smith of Indianapolis; four grandchildren, Chloe Miles, Carter Miles, Brooklyn Miles, and Caden Jones; his parents, Jon & Janet Chaffin of Bloomington; and his sister, Jennifer Chaffin of Bloomington. He was preceded in death by his grandparents and his granddaughter Ellie Mae Miles. A celebration of life service will be held at a later date. Cremation Rites have been accorded. Allen Funeral Home and Crematory have been entrusted with arrangements. Online condolences, photos and memories may be shared with family and friends at www.allencares.com

Jared Scot Chaffin, 53, of Ellettsville, Indiana passed away on December 10, 2021 at Franciscan Health Hospital in Indianapolis. He was born on August 6, 1968 in Bloomington, Indiana, the son of Jon Ronald and Janet Lynn (Adkins) Chaffin. He... View Obituary & Service Information

The family of Jared Scot Chaffin created this Life Tributes page to make it easy to share your memories.

Send flowers to the Chaffin family.