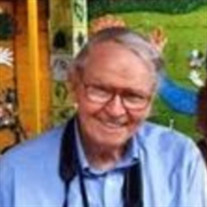 Jean Arthur Creek died on Nov. 16, 2021 at his home in Bloomington. He was 93. Born on May 8, 1928 in Evansville, Indiana, he was a son of Eunice (Schwitz) Creek and Arthur Creek, both of whom were school teachers. Jean absolutely believed... View Obituary & Service Information

The family of Dr. Jean Arthur Creek created this Life Tributes page to make it easy to share your memories.

Send flowers to the Creek family.