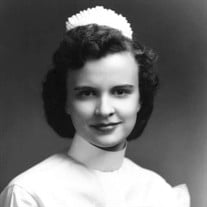 The family of Jean Helen Koehler Hammer mourn her death on Dec. 27, 2021, two days before her 94th birthday. She died at her cottage at Bell Trace in Bloomington under the care of her daughter, eldest granddaughter, IU Health Hospice and her friend and caregiver Koshie Lamptey. Born Dec. 29, 1927, in Philadelphia, Pa., Jean was the daughter of Julius Ernest and Elizabeth Winters Koehler. As a child, the tight-knit family lived above her father’s flower shop by the El in Frankford. When she had scarlet fever, the owner of the tavern next door delivered devilled crabs to her and her sequestered mother by threading a broom across the alley and through the porch rails. Later they would move up the hill to the stucco rowhouse on Penn Street. During World War II and at the age of 17, she entered the U.S. Cadet Nurse Corps and received her degree from the Frankford Hospital School of Nursing in 1947. She met her future husband while on rounds at Temple University School of Medicine. Dr. J.W. (Bill) Hammer Jr. preceded her in death in 2009. They were married 61 years. In 1949, the couple opened a family practice in Bill’s hometown, Middletown, Ind. There were house calls, $2 office visits and accounts occasionally settled with sweet corn and venison. She was not very good at preparing deer but made an oyster dressing that none of her descendants have been able to replicate. A woman who fully embraced her roles in the 1950s, she had an uncanny ability to feed 20 or so people at her table without breaking a sweat, was an ardent Brownie leader, Cub Scout den mother and 4-H teacher. She loved Hoosier lakes with sandy bottoms and kept the family going during the years her husband was serving in Japan during the Korean Conflict. Much later, she provided sanctuary, game-playing and cookie-making for her two Bloomington latchkey grandchildren. In 1965, the family moved to Bloomington where Bill was an early member of Southern Indiana Radiological Associates. Jean was a fierce bridge player and never had a mean thing to say about anyone although there was some eye rolling. She enjoyed her ties to the Boy’s Club Auxiliary, Hanover College, Stonebelt, Riley Hospital and the Monroe County Humane Society, from which she adopted her last companion, an eccentric yet entertaining Calico named Sophie. Sophie is currently looking for new digs in a quiet indoor space with no pets. She is, after all, a Calico. Jean is survived by three children: Jayne Spencer of Bloomington and her children, Emily Spencer and Wendy Chun-Hoon of Silver Spring, Md., and Patrick Spencer and Dr. Jun Matsui of Belmont, Calif; Bruce and Linda Hammer of Hernando, Fla., and their children, Jay Hammer of Bend, Ore., Russell and Mary Hammer of Warsaw, Ind., and Macy Thames of Minneapolis, Minn.; and the Rev. Stephen and Cyndy Hammer of Tempe, Ariz., and their children Gretchen and Joey Schultz, and Phillip Hammer, all of Tempe. In her last decade of life, she welcomed ten great-grandchildren: Julien and Dashiell Chun-Hoon; Grayson and Finley Schultz; Hadley Naoko and Stella Akari Spencer; Grey, Mylo and Atlas Hammer; and Asher Thames. She also is survived by one sister, Dorothy Korb of Bloomington. The sisters often broke each other up; their laughter could rattle the carillon bells. Allen Funeral Home and Crematory 4155 South Old State Road 37 has been entrusted with the arrangements and online condolences, photos and memories may be shared with family and friends at www.allencares.com

The family of Jean Helen Koehler Hammer mourn her death on Dec. 27, 2021, two days before her 94th birthday. She died at her cottage at Bell Trace in Bloomington under the care of her daughter, eldest granddaughter, IU Health Hospice and her... View Obituary & Service Information

The family of Jean Helen Koehler Hammer created this Life Tributes page to make it easy to share your memories.

The family of Jean Helen Koehler Hammer mourn her death on Dec....

Send flowers to the Hammer family.