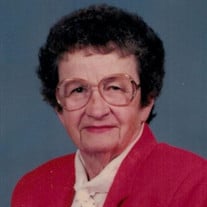 Jean Hopewell, who taught school in Helmsburg, Rossville and Bloomington before co-owning and operating The Betty Jean Shop, passed away on Monday, March 1, 2021 at her home in Bloomington. She was 103 years old. Along with Betty Rowen who also taught, she established the store that featured candy, greeting cards, party goods, and wedding invitations which served in downtown Bloomington from 1946 to 1983. Jean was born on July 9, 1917 in Seymour, Indiana to Clarence Dale and Georgia (Lauster) Hopewell. She was a graduate of Indiana University in 1940. A charter member of the local Altrusa, she also served as a member of the Salvation Army Auxiliary, the local American Cancer Society, IU YMCA, and was an instructor in the library Vital program, she led a drive with Altrusa to collect funds for trees in downtown and spent a number of years as a volunteer as Bloomington Hospital, she also delivered meals for Meals on Wheels. Feeling that the courthouse dome would be enhanced by lighting, she donated the first lights and wiring. Jean was preceded in death by her parents, her brother, David and her business partner, Betty Rowen. Survivors include nieces Nancy (Jerry) Dunn of Greenwood; Janet Hopewell of Indianapolis; great niece Kelly (Trent) Sutton and children Jonathan and Jackie; Kim (Brad) Jozi of Greenwood; Katie (Brandon) Smith and children, Oscar; Charlotte and Benjamin of Bloomington. A private celebration of life service will be held Saturday at First United Methodist Church in Bloomington, where she was a member. The Rev. Lisa Schubert Nowling will preside. Burial will be at Riverview Cemetery in Seymour, IN. Allen Funeral Home and Crematory have been entrusted with arrangements. Online condolences, photos and memories may be shared with family and friends at www.allencares.com

Jean Hopewell, who taught school in Helmsburg, Rossville and Bloomington before co-owning and operating The Betty Jean Shop, passed away on Monday, March 1, 2021 at her home in Bloomington. She was 103 years old. Along with Betty Rowen who... View Obituary & Service Information

The family of Jean Hopewell created this Life Tributes page to make it easy to share your memories.

Jean Hopewell, who taught school in Helmsburg, Rossville and...

Send flowers to the Hopewell family.